Eastside Connections students to perform ‘The Wizard of Oz’… 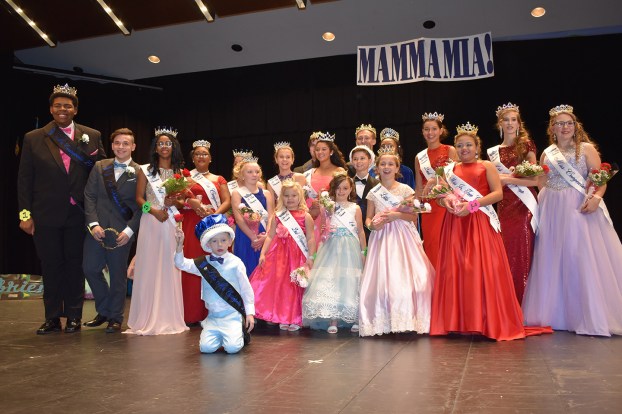 Pictured are the 2019 Cassopolis court, including runners up and second runners up. (Leader photo/ADAM DROSCHA)

CASSOPOLIS — On Sunday, family, friends and proud Cassopolis citizens gathered in the Ross Beatty Junior/Senior High School auditorium to see the crowning of the next Miss Cassopolis, as well as the Teen, Jr. Teen, and “the Littles” courts. One could feel the Cass pride in the room as the dozens of youth danced, paraded around the stage, and spoke about what they love about their home community.

Terryn Williams was crowned Miss Cassopolis, and Chance Cook was crowned Mr. Cassopolis, as well as receiving the “Mr. Nice Guy” sash. The crowned couple was boisterous and said they were eager to be young leaders in their community and to inspire Cassopolis youth.

“I feel so ecstatic. It’s unreal, and I just feel great,” Cook said. “I hope to pursue excellence, and be consistent. I want my court to be happy along with my community.”

The participants gave answers to a variety of questions for the audience, showing their humor, wit, charm and intelligence with poise and smiles. But the audience not only heard from the 2019 contestants and court, it also heard farewells, thanks and encouragement from the outgoing court.

“This last year has been really eye opening to what the community needs,” said Danny Young Jr., the 2018 Mr. Cassopolis. “Besides school, there’s not a lot of programs here in Cass to get involved in the community for the youth, so things like this are really a great blessing to these youth.”

“It’s very important because it gets us out serving and teaches us how to do community service,” McGrew said. “It was so amazing. We did so much, and it was so much fun. This next court will do amazing.”

The event was a legacy affair as other former court members were recognized on both the stage and in the audience. Emceeing the event were two former members of the court, Stacey Lynn Horstmann, Miss Cassopolis 2016, and Jacob Roth, Mr. Cassopolis 2015. The event also witnessed the first Legacy Queen Dance, featuring the crowned Miss Cassopolis queens from the previous three years.