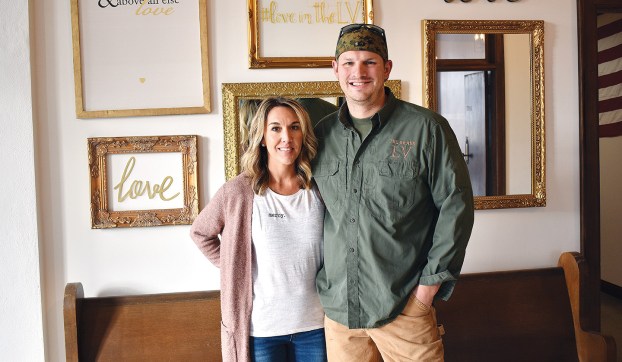 NILES — When Don and Melanie Kennedy first purchased the former Elks Temple building at 104 N. Third St., they knew they had their work cut out for them.

Beneath crumbling moulding and layers of dust, the couple said they saw the former elegance of the 1920s era-building shining through. As they worked to bring their vision for the Grand LV – an event venue — to life they wanted to upgrade and restore the character and luster that made the building unique.

After 10 months of renovation, the main floor space, called Fifty5 at the Grand LV, has opened for business. To welcome the public to the new events hall, the Grand LV will host an open house from 1 to 4 p.m. Sunday, Feb. 3. People will be able to tour the main floor which includes the Kull Memorial State Room, the reception hall and bridal and groom suites. The basement will also be open for viewing.

“I know that people are inquisitive and want to see what’s going in the building,” Melanie said. “A lot of people who grew up in Niles have memories from the Elks and having dances here.”

A 128-capacity room designed to have rustic but modern appeal is among the new upgrades. Formerly called the Bonine Room, the Kull Memorial State Room is named in honor of Marine veteran and Niles High School graduate Ayron Kull. Don, also a Marine veteran, served with Kull during Operation Iraqi Freedom. While both Marines made it home safely, Kull lost his life after a tragic work accident.

“[Ayron] is very much a part of this community and my life still,” Don said. “It’s important that his legacy live on and that’s why we named the room after him.”

Melanie said it will give people another place to gather.

“We see this room for ceremonies, like corporate events or meetings, something smaller than you would need for the downstairs,” Melanie said.

Before its renovations, the room needed a number of upgrades. There was a hole in the ceiling, old carpeting glued to the floor and peeling wallpaper and crumbling plaster. Using the original blueprints for the room, the couple had a guide for the renovation process.

“We tried out best to restore this room to what we thought it would have looked like early on,” Melanie said.

Throughout the renovation process, Don and Melanie also sought to preserve different historic pieces of the building. They removed a glass plate, originally above the door in the Kull room, that read: Dr. Bonine — a testament to a Niles optometrist. With the glass safely stowed away, the couple said they are considering donating it to a local museum. Restoring the crumbling, but signature moulding was also part of the restoration process. A screen door found with a hole in it was restored and repurposed to hold a mirror. The design element now hangs in the grooms’ suite.

“There was such an amazing trade craft that existed during that era,” Don said. “It is unfortunate when that gets built over or torn out. It is that charm and charisma that we fell in love with when we first saw the building. It was always something we wanted to do with the property.”

After purchasing the building in April last year, the couple restored the basement floor of the building, opening Fifty5, an events hall space in June.

Since then, the couple said they have been consistently booked and the space has served as a place for graduations, parties, balls and celebration of life services. A number of weddings have already been booked for 2019.

While restoring the historic building and creating a local event hall were driving goals in making the project a reality, a personal tie to the location has made the project particularly special.

On Sept. 28, 1978, Melanie’s parents, Lennie and Vickie, wed in the building’s basement. While they have since passed away after battles with cancer, Melanie sought to honor them. The business’ name is inspired from their initials “L” and “V.”

Melanie and Don said they still intend to renovate the top floor of the building, but do not have a time frame yet for the project’s completion. Business owner Brandon Townsley is also expecting to open the Niles Brewing Company inside the Grand LV in the months to come.

With another part of the building restored, Don and Melanie said they felt proud to be able to share it with the public.

“We can take a step back now and realize that we actually did finish it and we did accomplish what we meant to accomplish,” Melanie said. “I don’t think we realized it day to day all the transformations, but looking back at before pictures and comparing them to the after pictures it is kind of mind blowing actually.”

For details about Fifty5 at the Grand LV, visit the business’ Facebook page.