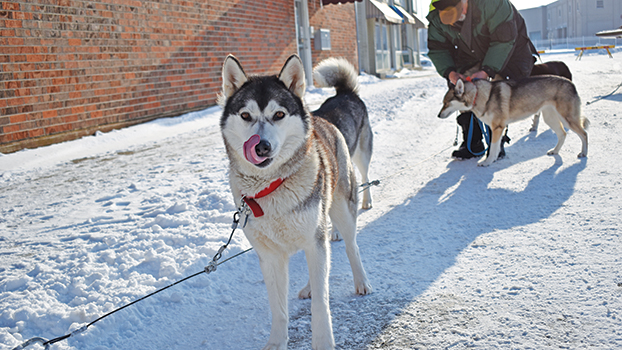 DOWAGIAC — By 9:30 a.m. Saturday, Alfredo Arroyo, 79, of La Porte, Indiana, had been standing outside on the streets of Dowagiac for hours, the cold wind causing tears to stream down his face. Despite this, he had a smile on his face because he was doing what he loved — making sculptures out of ice.

“It makes me happy,” he said, standing proudly next to a half-finished sculpture of a dragon’s head. “I especially like seeing the kids. The first thing they want to do [when they see a sculpture] is walk up and touch it.”

Event Chairwoman Kris Soenen said she appreciated the work the ice carvers did Saturday, adding that the festival had good attendance Saturday due to favorable weather.

“It’s been a long week for everyone being cooped up inside with cabin fever, so it’s great to see everyone getting out to enjoy the festival and the milder weather,” she said.

For the ice carvers who attended the festival, Saturday’s event allowed them to flex their creative muscles and practice a craft they love.

Arroyo has been carving ice for 59 years, which he learned how to do when he worked in kitchens that would create elaborate ice sculptures for weddings and events. He has been carving at the Ice Time Festival since its inaugural year. He said he keeps coming back to the Ice Time Festival year after year because he enjoys the town and the way that the people of Dowagiac embrace the festival.

“By this time of year, people are ready to get out and about and out of the house,” he said. “I like to do this and see people’s reactions.”

Arroyo was one of five carvers who contributed 27 sculptures in total to the Ice Time Festival Saturday.

Richard Biggs, 55, of South Bend, is another sculptor that has been attending the ice festival every year since it started. He said that even though he does not consider himself a natural artist, he has practiced for 24 years to hone his craft of ice sculpting and enjoys attending the Ice Time Festival each year.

“Ice carving in a matter of removing what isn’t there, and I just like to use it to express my creativity,” Biggs said. “You can’t get attached to the artwork, because it won’t last. But I always hope it will at least last throughout the day before the weather destroys it, so that people can enjoy it.”

Both Biggs and Arroyo said they hoped their creations could put a smile on people’s faces. The sculptures certainly seemed to be enjoyed by visitors, and Arroyo even saw his prediction of children enjoying and touching his works come true. Later that day, a little girl ran up to a Mickey Mouse sculpture he had made and immediately grabbed it by the nose, laughing as she did so.

“That is rewarding,” Arroyo said. “That is what I want people to do when they see [my sculptures].”