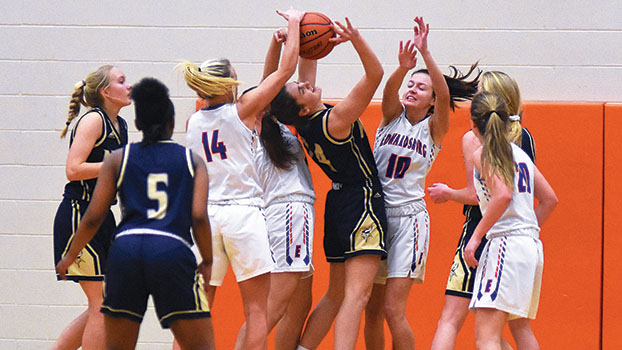 The Edwardsburg defense made it difficult for Niles to get off shots in the Eddies’ 61-27 victory Monday night. (Leader photo/SCOTT NOVAK)

EDWARDSBURG — A lot is made out of the high-powered Edwardsburg girls basketball team’s offense.

And with good reason.

The Eddies have already scored 960 points this season through 16 games and are averaging 60.0 points per contest heading into the final two weeks of the season.

Edwardsburg improved to 16-0 with a 61-27 victory over visiting Niles in a makeup game Monday night.

It was the ninth time this season that the Eddies have scored 60 or more points.

But if Edwardsburg is going to make a long run in the postseason, it will be their defense that will have to carry them.

The Eddies have allowed just 28.8 points per game this season and have held their opponents to 30 or fewer points 12 times.

“We can get sloppy at times, but we have been working on closing gaps and not allowing people to penetrate and drive on us,” said Edwardsburg coach Jon Pobuda. “We get out and cover shots pretty well, and we contest shots well. We just seem to be doing things pretty well all around on defense.”

Pobuda said there are times that his squad likes to gamble and cheat on defense, which allows opponents to take advantage of those opportunities to score some easy baskets. But those times are getting further and farther between as the Eddies set their sights on another district championship and moving beyond the regional round of the state tournament.

“Most of the time we do what we are supposed to do and we are in the right spots,” he said. “We are playing pretty good defense.”

Playing sound defense and taking away the driving lanes was an important part of Edwardsburg’s win over Niles Monday night.

The Vikings’ junior point guard Alycia Patterson likes to cut to the basket off the dribble, but was thwarted most of the evening by the Eddies’ zone defense.

“We just want everyone from penetrating the zone or the press,” Pobuda said. “There are times where we get lazy and like to reach, but I thought tonight we did a good keeping things in front of us and now allowing them to get to the basket.”

“We have been doing a much better job of that lately.”

The Edwardsburg defense was stifling in the opening half, allowing the Vikings just 11 points.

That defense created numerous turnovers, which led to easy basketball. It also limited Niles to a single shot attempt most of the game, but particularly in the opening half.

The Eddies had no trouble scoring against the Vikings, pouring in 19 first-quarter points, as they opened up a 19-4 lead, which grew to 32-11 by halftime.

Senior guard Kaitlyn Zarycki put on another show with a game-high 29 points, of which 20 came in the opening half. Zarycki netted nine points in the opening quarter and 11 in the second quarter.

Edwardsburg’s scoring pace did not slow down much over the final 16 minutes of play as it scored 29 points.

Niles was able to score a few more points in the second half, but still only finished with 16 points.

Besides Zarycki, Edwardsburg also got 16 points from Claire Bartz and eight points from Abbey Krugh.

Niles was led by Reese Davies, who had eight points. Kamryn Patterson and Alexi Rauch both finished with six points. Alycia Patterson, the Vikings’ leading scorer, was held to just three points.

Edwardsburg was right back in action Tuesday night as it traveled to St. Joseph for another non-conference contest.

Niles was also back in action Tuesday as it hosted Battle Creek Lakeview in a non-divisional SMAC game.