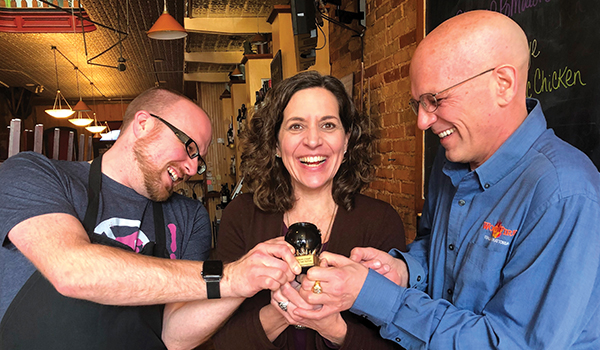 DOWAGIAC — What could have been as a disaster for Baker’s Rhapsody owner Jordan Anderson’s entry in Dowagiac’s annual Ice Time chili crawl ended up turning into a victory.

Saturday morning, after Anderson had his chili prepped and ready, he was bringing it into his shop, and he dropped half of it on the sidewalk.

Still, Anderson ended up tying for first place against Kevin Hanner, one of the owners at Wood Fire Trattoria. Coming in second was Wounded Minnow Saloon, followed by Front Street Crossing Café. Other local businesses also participated in the chili crawl, including Caruso’s Candy Kitchen, Dowagiac Eagles 2441 and Round Oak Revisited & Philo’s Pub.

Kris Soenen, the event chair, said the participation in the chili crawl seemed to be up this year.

Anderson, who grew up in Wisconsin, surrounded by huge Green Bay Packers fans, remembers having chili for tailgating and Super Bowls, but as a child, he rarely enjoyed the taste.

“It wasn’t until I started culinary school and cooking for myself that I really started to enjoy those flavors,” he said.

With his winning chili, Anderson does not have a specific ingredient he adds to make it delicious. Instead, he tries to cook his chili in layers of flavor. Anderson starts by sautéing the onions and sautéing the peppers separately. He de-glazes his pan to mix everything in and  to keep all of the flavors together, rather than just tossing everything into a pot and cooking it.

“Everybody is always looking forward to it,” he said. “I think, [the chili crawl] is a great thing for downtown. It was one of our busier days for sure.”

Usually, Anderson is the only one who cooks the chili as this time of the year is the bakery’s busy season.

“As we get more people, maybe we will let them have a hand at it, too,” he said.

The bakery has been competing in the competition since 2005 and has taken home three out of five wins, Anderson said.

Hanner, of Wood Fire Trattoria, said his chef, Cheryl Horiuchi, is the mastermind behind the restaurant’s success in the chili crawl. In October, Horiuchi will celebrate her 17th year working at the restaurant.

Horiuchi said the restaurant has competed in the chili crawl for more than 10 years and has taken home at least five first-place trophies. Their win on Saturday did not come as a surprise to her.

“This year, we used a recipe from Rick Leach, who works with me in the back,” Horiuchi said. “He called it ‘Chuck Wagon Chili’ because it has all kinds of meats in it.”

“There’s a lot of people here [during the festival], so it livens up the place,” Horiuchi said.

Horiuchi enjoys the flavors of chili and getting involved in the community.

“It’s part of the business community and downtown development to get involved in things like the chili crawl,” she said.