Tennis courts will come back to Brandywine 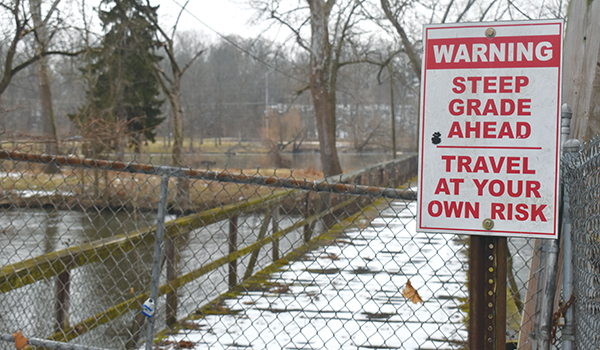 Island Park bridge to be improved

NILES — Since Island Park was closed off to the public in February 2018 due to major flooding on the St. Joseph River, its most frequent visitors have been geese.

Two years later, Niles City Council approved a contract to repair the bridge and replace the gates of Island Park off of Parkway St., Niles.

While the park will still be inaccessible to the public, the Monday evening approval was meant to increase safety and be the potential first steps in cleaning up the island itself.

Balkema Construction, of Kalamazoo, will repair the bridge for $80,636. Inspections and load ratings will cost the city an additional $15,680. New fencing and gates will cost up to $10,000.

In total, the project could cost $106,316, but a city settlement from the Michigan Municipal League would offset about $50,000.

When the February 2018 flood hit Niles, properties along the St. Joseph River were damaged by high water levels and debris. Island Park was submerged in water while its bridge was knocked out of alignment.

The construction project will bring the bridge back into alignment, make it slope less and help keep pedestrians safe during flooding events.

“We thought it was worthwhile to repair the bridge as opposed to demolish the bridge,” said council member John DiCostanzo about the previous decision. “There’s some value in having the bridge there in the event that we have to do any rescues.”

Council member Daniel VandenHeede was the sole “no” vote.

VandenHeede said spending tens of thousands of dollars on bridge repairs, coupled with an estimated $100,000 island cleanup project that could be voted on in the future, was a “bridge to nowhere.”

“If we look at all other needs that the city has, I just don’t think it’s fiscally responsible to do that,” he said.

VandenHeede worried that flooding would occur in the future, once again damaging the island and the bridge.

Ray said that while safety measures may be taken regarding Island Park, his larger concern was the river. Flooding has been an issue recently, and many edges of the river slope gently, enticing people to enter the water.

For now, Island Park will remain closed to the public, its playground equipment coloring an otherwise overgrown space browned by winter.