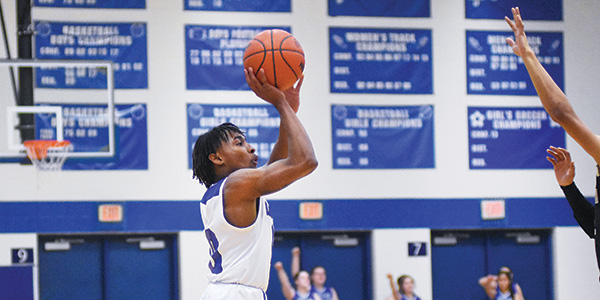 Darrion Gatson, who scored a school record 51 points last Friday night, followed that up with 26 points against Decatur on Tuesday. (Leader photo/SCOTT NOVAK)

CASSOPOLIS — Things are starting to come together for the Cassopolis boys basketball team.

The Rangers have battled through injuries and illness in recent weeks. Despite the challenges, Cassopolis is just a game behind Marcellus in the loss column in the Southwest 10 Conference standings.

The Rangers struggled out of the gate Tuesday night against Decatur, but erupted for 27 points in the final quarter to pull out a 67-37 league win that improved its record to 9-2.

The Wildcats, who host the Rangers on Feb. 25, are 11-1 in league games after 61-49 win over White Pigeon Tuesday night.

If the Rangers are going to defend their conference championship successfully, veteran coach Ricky Evans knows that it will be their defense that leads the way.

Both teams struggled shooting the ball for the first two quarters.

The outside shooting did not improve in the second half, but Cassopolis began attacking the rim and turned up the defensive pressure, which led to easy baskets and a lopsided victory.

Evans told his team that despite the fact that there are still seven regular-season games on the schedule, the Rangers are going into “playoff” mode.

The Rangers should get a boost from the return of Ahsan Hart next week. He has missed the entire season up to this point after a health issue was discovered following football season.

“I was so happy the other day at practice when I got the word,” Evans said.

The Rangers were able to stretch their lead to 40-33 heading into the final eight minutes before exploding for 27 points.

“Tonight was not a jump-shot night,” Evans said. “So, we took everything to the basket. We have to play better defense. We stressed that at halftime. We wanted to press and make them uncomfortable, so we went to our man-to-man press, which created turnovers and opened up the floodgates.”

Bob Cerven had 11 points for the Raiders.