Chieftains come up short against Tigers 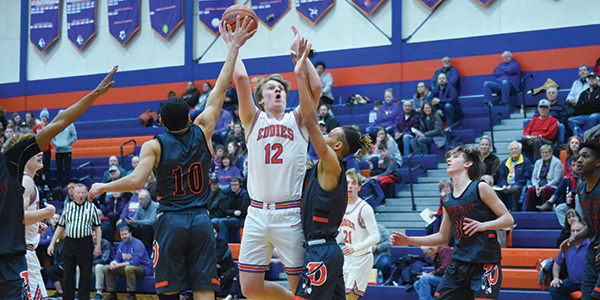 EDWARDSBURG — Except for about two minutes, the Edwardsburg boys basketball team was able to control the tempo against visiting Dowagiac in their key Wolverine Conference South Division contest Friday night.

That allowed the Eddies to pull into a tie with the Chieftains atop the division standing following their 51-45 victory.

Veteran Edwardsburg coach Stephen Wright has been trying to get his team to play this way against Dowagiac for some time now. Unfortunately, the Chieftains have always been able to get the Eddies to play their pace, which made Edwardsburg uncomfortable, and usually on the wrong end of the final score.

“They [Dowagiac] get the ball, and you hold your breath because they have so many weapons,” Wright said about the end of the half spurt. “We have to manage the game and play our way in order to have a shot. We were able to keep it at the pace we needed to win it.”

The first thing Wright and the coaches told the Eddies when they got into the locker room at halftime was simple but important.

“We told them we are still leading the game,” he said. “That was the message. ‘Don’t forget, we played a really nice first half.’ They had a nice run, and they hit some tough shots, but ultimately we are still up six.”

Winners of seven consecutive games heading into Friday night, Dowagiac may have gotten caught by the Eddies being complacent.

“We just did not play 32 minutes tonight,” said Dowagiac coach Danum Hunt. “I tell the guys ‘when you do not give 100-percent maximum effort for 32 minutes, that is always going to be the outcome.’”

Dowagiac came out struggling to shoot the ball and did not play well defensively as Edwardsburg forced a game tempo they were comfortable playing. The Eddies also attacked the basket, which Dowagiac was unable to stop pretty much the entire game.

Edwardsburg led 16-8 after one quarter, but had to withstand the lone Dowagiac challenge at the end of the first half when the Chieftains forced the pace and cut the Eddies’ advantage to 24-18.

The Chieftains never made any such run in the second half.

“I think complacency played a part,” Hunt said. “We went on a seven-game win streak there. The fellas got a bit complacent because we had some easy wins in there. The consensus here tonight is we need to get back to work and work harder. I think everyone is on the same page.”

Max Hafner and Zach Strycker both had 10 points to lead a balanced Edwardsburg attack.

Edwardsburg is hoping to build off the win against the Chieftains as it heads down the regular-season stretch toward the state tournament.

“I think this was huge,” Wright said about the victory. “We just need to continue to work and get better. They have had our number the past couple of years, but to finally get that win is big.”