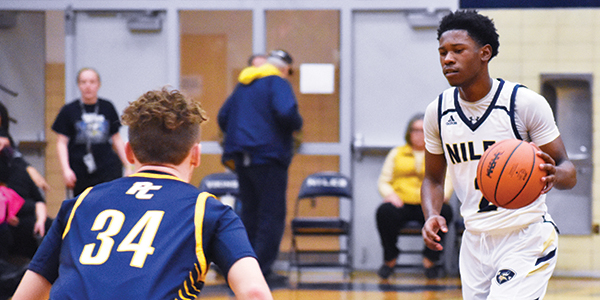 The Vikings were outscored 16-7 in the opening quarter of its SMAC non-divisional 58-40 loss to visiting Gull Lake.

Niles (2-12) had just four fewer field goals than the Blue Devils, who had 11 3-pointers compared to none by the Vikings.

The Vikings trailed 28-19 at halftime before being outscored 30-21 in the final two quarters.

Adrian Thomas had 14 points for Niles and was the lone Viking to reach double figures.

Jacob Louden had a game-high 17 points to lead Gull Lake.

In Richmond, visiting Niles dropped a 55-49 decision to the Blue Devils.

The game was close throughout, with Gull Lake holding a 41-40 lead heading into the final quarter, where it outscored the Vikings 14-9 to pull away to the win.

Mackenzie Ford had a game-high 23 for Gull Lake.

Brandywine (15-0) raced out to a 22-2 first-quarter lead and never looked back. The Bobcats led 34-16 at halftime and by 21 points heading to the fourth quarter.

Zakiyyah Abdullah scored a game-high 21 points for Brandywine, which also got 13 points from Alexis Rhodes, 12 points from Kennedy Byrd and 11 points from Megan Schmidt.

The Brandywine boys team was also a winner Tuesday night as it knocked off host Constantine 65-49 to improve to 12-1 on the year.

The Bobcats jumped out to a 10-point lead after one quarter, but the Falcons trimmed that advantage to 34-31 by halftime. Brandywine took a 46-44 lead into the final quarter, where it held a 19-15 advantage on the scoreboard.

Trey Salisbury scored 19 points to lead the Falcons, who also got 18 points from Davonte Conley.