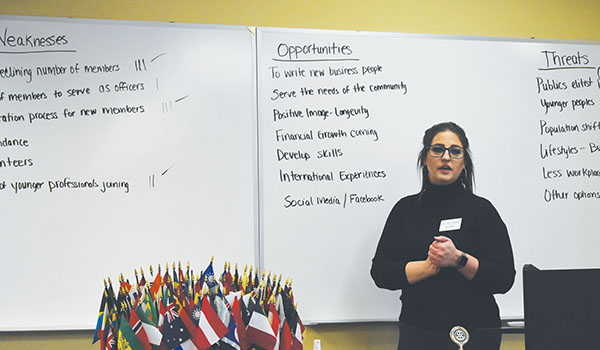 Rotarian Kellee Miller, the marketing and community liaison at the Timbers of Cass County, 55432 Colby St., Dowagiac, continued the second part of her planning technique for the future of the Dowagiac Rotary Club. Miller has worked at Timbers for more than two years. The primary focus of her role is to work on partnerships within the community and to build business relationships.

“I talk for a living. That’s my job,” she said with a smile.

Written on a whiteboard behind Miller was a list of Rotary’s strengths, weaknesses, opportunities and threats.

Miller encouraged the group to rank the top three they would like to focus on. The goal is to turn the group’s weaknesses into strengths and put a plan together to improve those weaknesses.

“It’s going to take a lot of personal accountability,” Miller said. “Everybody is going to have to jump in and help. It can’t be just one person. It is going to require everyone to take a small piece to push the club forward.”

Rotarian Walter Swann said his ministry is about young people, and he works with them often.

Next, Rotary members discussed the threats the club could face with the public’s perception as one of the most discussed, items on the list.

“I think the perception of what a lot of people believe is that you have to be involved in business before you can join,” said Dee Leverson. “I sold my business years ago.”

Next, the club brainstormed ideas for plans to address its weaknesses. Rotarian Larry Crandall said in the business world, this idea “referred leads.” In business, the referral leads are used to introduce potential customers to a company from an advocate. Crandall suggested that Rotary make a similar approach.

Members also discussed possibly doing scholarships for dues if cost was a barrier for potential new members or Rotarians who take on leadership positions or join subcommittees.

The club also discussed hosting a meet and greet in an informal setting to invite new members to join.

To take action before the end of the meeting, Miller encouraged every member of Rotary who uses Facebook to go like the Dowagiac Rotary Club Facebook page and help get the word out about the club within the community.

“It doesn’t have to be complicated,” Miller said, pointing to the analysis. “You can see these are the things we’ve been focusing on, and did we turn these weaknesses into strengths? Nothing is set in stone, which is nice. If it doesn’t work, we go back to the drawing board, and we try something else. To keep trying is really what’s important.”