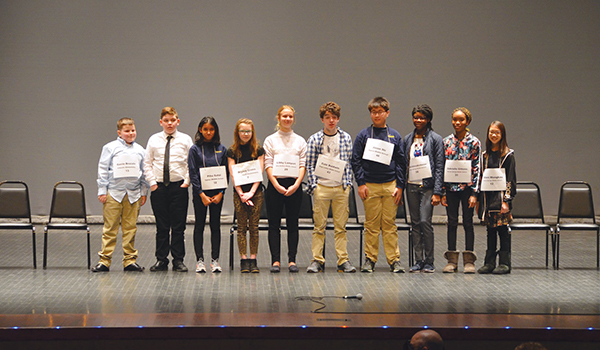 They joined students like themselves, who were top spellers at their schoolwide spelling competitions. The winner of Cloverleaf would advance to Scripps National Spelling Bee in Washington, D.C.

Schools from Berrien and Van Buren counties were invited and 16 came.

Despite the spelling bee’s name, Cloverleaf is not a competition of luck.

Then, he worked on his spelling skills with Ring Lardner’s spelling bee organizer and Cloverleaf coach, teacher Rikki Jones.

Gross said he was nervous throughout the event, even after spelling his first word right. The thought of misspelling a word was always in the back of his mind.

“I was so nervous that I almost died from embarrassment,” said Javion Hodge, a Ballard Elementary School fourth grader.

“You’re happy about being there, but you’re nervous about the same thing,” Nelson said.

They were happy because they were the top spellers at Ballard and had the chance to move on to a larger competition, but nervous because one misspelled word could mean the end of their run.

Nelson said she was especially thrown off her game because the judge had her test the microphone she and other students would recite from.

The students do not all remember which words they spelled correctly, but they do remember the words that eliminated them: “berserk” for Buckhanan, “panache” for Gross, “havoc” for Hodge and “forensics” for Nelson.

For future Cloverleaf competitors, Gross provided the following advice when on stage: “Breath in your nose and out your mouth. Just focus and be calm.”

Gross’s counterpart, homeschooled eighth grader Cole Baldwin, placed second at the event, winning a $200 cash prize and a Merriam-Webster dictionary. He represented Ring Lardner as a homeschooled student in the Niles district.

Amy Gourlay, Ring Lardner media center staff member, said she was proud of the students, their performance and the work they put into preparing for the spelling bee. She understood how daunting the contest could be.

“It’s a really well-run spelling bee,” she said. “It reminded me of the one you can see on TV.”

Along with a $1,000 cash prize from Cook Nuclear Plant, Shi also received free entry and a free hotel stay for the Scripps National Spelling Bee.

Gov. Whitmer closes schools for the remainder of the year

Community members step up in a mask shortage stitch

SMC extends online classes through the end of spring semester

First Cass County resident dies as a result of COVID-19