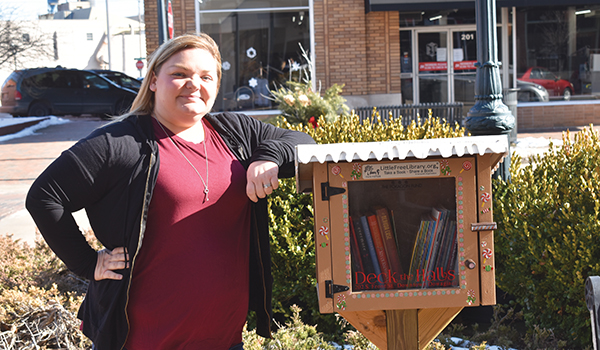 DOWAGIAC — Melissa Gunn is no stranger to the world of books. While she owns her own business, Deck the Halls, which caters to one’s inner holiday spirit, a few stores down, her husband, Jeff, owns Olympia Books, which provides the community with stories.

With the couple’s love for books, it seemed like a no-brainer for them to enter the city of Dowagiac’s drawing to create a Little Free Library.

Now newly stationed on the corner of Commercial and Front streets, Gunn’s gingerbread house-themed Little Free Library welcomes visitors to downtown and encourages them to grab a book along the way.

The Pokagon Fund awarded a grant to the Little Free Libraries program to install 12 libraries throughout the three wards of Dowagiac. The Pokagon Band of Potawatomi Indians funds the Pokagon Fund. As new libraries are unveiled near businesses, in parks and at local destinations, partnerships between the designers, stewards and businesses are cultivated.

“I think they are a really great opportunity for all ages in the community,” Gunn said. “It’s a great place to be able to grab a book and drop off a book.”

Gunn said her life involves lots of books. In her formal living room at her home, four bookshelves span from the ceiling to the floor and are bursting with books.

“A lot of the books we keep are treasured gift-type books or signed editions,” Gunn said. “A lot of them are copies I have read, and then they just go back on the shelf. A Little Free Library is a great place to put the books I’ve already really enjoyed reading.”

In the back of her shop, Gunn has three boxes full of books to help restock the library. Already, she has restocked the tiny holiday-themed library three or four times. Seated behind the counter in her store, she also gets a glimpse at the foot traffic the library has welcomed.

“I would say any person that walks by under the age of 13, regardless of where they are going, who they are with or what they are doing, they stop,” Gunn said. “They open the door and look.”

A grandmother and her grandson who were walking down Front Street one day, stood out to Gunn. She said the grandson’s face lit up when he saw the Little Free Library and was encouraged to grab a story from inside.

When Gunn was selected out of the Little Free Library lottery, her immediate idea was to design the library into a gingerbread house.

Gunn picked up colorful paints, different colored pieces of vinyl and reached out to one of her friends, a woodworker, to carve out details for the gingerbread house. The door and fireplace both have 3D effects. Gunn also had a chimney added to the structure and included scalloped detailing to mimic the appearance of snow.

“I had a lot of fun doing it,” Gunn said, motioning to the silver glitter on the roof. “I knew right from the get-go I wanted to do full-on Christmas.”