Relevant Church keeps focus on Jesus in a time… 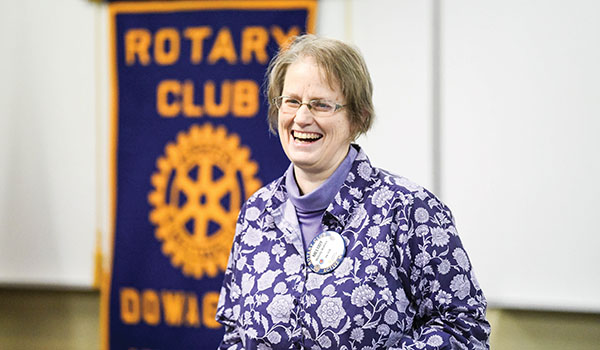 Rotary President Melody Wallace is leading Dowagiac Rotary is leading the club during its centennial year.

At its peak, the Dowagiac Rotary club attracted more than 100 members. Teachers, lawyers and business professionals would congregate once a week to share a meal, handle some occasional business and revel in the common goal of “service above self.”

Throughout the years, meeting locations may have changed, officers switched in and out, and community service events have shifted. What has remained despite the change is the club itself. This year, the Dowagiac Rotary Club, which chartered in 1920 through Rotary International, celebrates its centennial anniversary.

Richard Judd Jr., who is the club’s longest sitting Rotarian, said at one point in the 1970s when he joined, membership was steady at 90. Today, membership sits at about 35 members.

Though Rotarians celebrate the milestone, not every service organization can be so lucky.

Declines in other service organizations like the Lions and Optimists, both with active organizations in both Berrien and Cass counties, have also faced declining membership.

As Dowagiac’s Rotary looks to the future, one Rotarian is spearheading a proposal to reignite membership participation in the club. 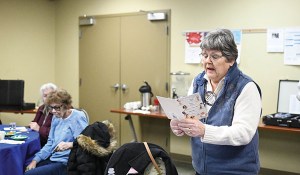 Victor Fitz tends to be obsessive about numbers. In what little time he has outside of his job as the Cass County prosecutor, he enjoys looking at statistics and is active at Cassopolis United Methodist Church.

Fitz is the guy sitting in the back counting how many people filled the pews instead of listening to the pastor’s sermon. He worries about losing a few more members of the congregation and how that would affect the church’s organizational structure. So, it is unsurprising he counts how many Rotarians attend Dowagiac’s weekly meetings at noon on Thursdays and has similar fears.

“There have been a number of Rotary organizations that have gone by the wayside in the last couple of decades for similar reasons,” he said. “I remember back a decade ago, I would count to see how many people we have. We would always flirt with about 30 people.”

Fitz also remembers when he first joined in 2003, 77 members filled the club. He was pushed into it after just moving to the county.

“I wasn’t too enthusiastic about it, but I knew it was important to do,” he said. “Now, I love it. I see the important stuff this organization does.”

That is why Fitz proposed the club focus on getting its membership back up to 100 members throughout the centennial year.

By using parts of the club’s past, Fitz wants to help its future. He previously served as club president and is both proud and ashamed of membership’s ups and downs during his reign. He helped the organization get its membership up to 60.

“The part I am embarrassed about is that we didn’t keep our membership at that level,” he said. “Some of it was natural arbitration. But I think part of the reason we did that was because we didn’t have an infrastructure to keep them there.” 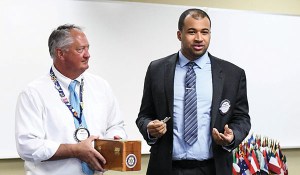 On a Tuesday, the smell of egg rolls and fried rice filled the room as a small group of friendly faces talked amongst themselves in a back room at Ho Ping Garden in Niles. In the corner of the room stood a flag pole with the Optimist Creed proudly on display.

As civic organizations decline in membership, members of the Niles Noon Optimist Club, chartered in 1970, naturally remain optimistic and are working to get the word out to a younger crowd.

In October 2019, the club found new leadership in Optimist Sammee Schaller, who is the Niles-Buchanan YMCA aquatics director. She stepped up to the role after previously serving as vice president.

Schaller, who joined the organization through the encouragement of her supervisor, said the club has been largely known in the area for its youth soccer league, which begins in March. Since 2016, the Niles Optimists have been in a partnership with the Niles’ Buchanan YMCA.

Currently, the volunteer organization’s number one goal is to grow its membership.

“With soccer, we pour everything into it, on top of full-time jobs,” Schaller said of members in the group. “We need more Optimists in the club to help find balance and help volunteer at our fundraisers.”

While attracting new members, the group is hesitant to give up its traditions — like hosting its meeting at noon on a weekly basis.

“With us targeting more working people, we wonder if we should continue meeting once a week,” Schaller said. “It’s sensitive to our members that have been here since the beginning.”

The group plans to host focus groups to figure out what they can do to get the word out. They brainstormed happy hour events or hosting coffee and bagel meetings.

Despite the uncertainty of the future, the mission of optimists stays consistent — to provide hope and a positive vision. Members of the group added how Optimists bring out the best in youth, communities and themselves.

Dr. Jim Listenberger, now a retired eye doctor, joined the club later in life. He still saw the benefits of being surrounded by like-minded individuals.

“I was going along at age 40, working with other people and thinking, ‘there is more to life than this,’” he said sitting next to his fellow Optimists. “Becoming an Optimist helped give me that spirit I was searching for.”

Fitz’s vision for the future of Rotary is to need to move into a bigger meeting space than the one the group currently occupies at Front Street Crossing. 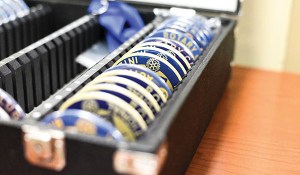 To attract new members, Fitz has decided to get creative by bringing back a past initiative. Over the 100-year anniversary, he wants every Rotarian to bring two people to join.

Fitz pictures a membership of 105, leaving a five-person margin of error.

Once new members are brought in, the club agreed it needs a more established new member orientation to address transparency about costs, and an induction ceremony where members can be officially pinned and presented.

Fitz also wants to establish two centennial awards, one for recruiting to award the member who brings in new blood to Rotary with a $100 gift certificate. Fitz wants to call it the Fred Mathews Recruiting Award after Mathews, who was instrumental in keeping Dowagiac Rotary running. A second attendance award would be the Graham Woodhouse Award. Fitz spoke with Rotarian Don Woodhouse, who agreed to have the award be in his father’s honor.

More than a club

At a meeting in January, Rotarian and Sheriff Richard Behnke talked about how a pipe burst at his house. He texted a past Rotarian member, who works at Servpro, a water cleanup franchise. The past Rotarian answered swiftly and was able to fix the issue.

“The amazing thing was his company was very busy floating in Kalamazoo,” Behnke said. “He said, ‘Give me a couple hours, and I’ll get to you.’ I know it’s that relationship we’ve built from Rotary.”

“On a Sunday morning, they took us to an art institute,” Herman said. “It was huge. It was like going to the art institute in Chicago.”

Despite the place being closed, Herman’s group was allowed in. The man he was staying with asked Herman if he liked the paintings in the exhibit. Herman responded with ‘yes,’ and the fellow Rotarian took one of the paintings off the wall and handed it to him.

“He purchased one of those paintings for me,” Herman said. “I still have the painting, and it hangs in my house.”

In another story, after a Rotary dinner, Herman’s crown fell off his tooth, he called up fellow Rotarian, Dr. Matthew Cripe, and at 10:30 p.m., was getting it replaced.

A while ago, the night before Herman went on vacation, he hurt his eye and he called Dr. Katie Marshall, an eye doctor at Southwest Vision Center and fellow Dowagiac Rotarian who was able to take a look at it before he left.

The relationships of Rotary go well beyond the walls of its meeting space, according to its members.

“Things like that just happen when you are a member of Rotary,” Herman said.