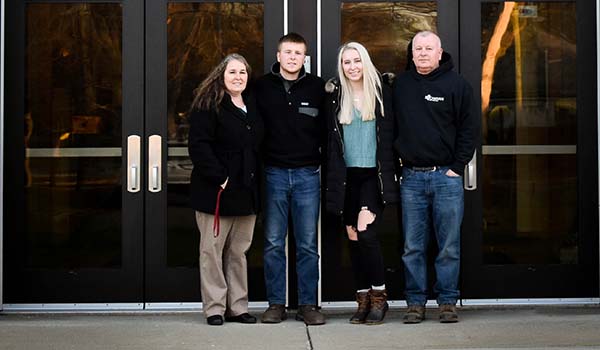 Outside Buchanan High School are the Adkersons: mother, Becky; son, Chad; daughter, Megan; and father, JT. Chad and Megan have benefited from the Buchanan Promise, a scholarship for students in the Buchanan school district.

Buchanan Promise has time to fulfill goals, but impact is already seen

When Becky and JT Adkerson prepared to build a new home for their family three years ago, they had no intentions of moving out of the Buchanan area.

Becky, a lifelong resident, had worked at Buchanan Community Schools for nearly two decades. JT had worked for the city of Buchanan for about 25 years.

They also had two $10,000 scholarships available for their children if they stayed.

That award was the Buchanan Promise, a post-secondary education scholarship program started in 2016. It is offered to any Buchanan Community Schools student that resides in the district — from Buchanan to Galien — and has qualified for an approved post-secondary program.

The Promise will provide upwards of $2,500 a year for a maximum of $10,000 to a student’s educational institution, dependent on how long they have lived in the district.

There are no GPA requirements, no minimum SAT scores, no clean slates in school discipline. Enroll in an approved college, beauty school, trade school or something in between, and money will be sent to the institution. Students have six years to spend the four years’ worth of money.

The Adkerson’s son, Chad, has used part of his $10,000 for an associate’s degree at Lake Michigan College and a Class A commercial driver’s license. Now, he will work for American Electric Power and is expected to make close to $100,000 each year in the coming years.

His daughter, Megan, will soon make use of the Promise as she pursues a college degree. She hopes the scholarship will cut into the costs of a master’s program. 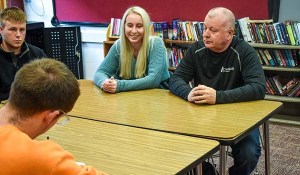 Schirmer, Jr., who gave the money to the Michigan Community Gateway Foundation, of Buchanan, 111 Days Ave.

“It’s not just a scholarship,” said Rob Habicht, outgoing president and CEO of the foundation. “It is a culture. It’s a thought. It’s an expectation that students are going to go on after high school. And if we can create that culture, universally, in this community, I think that’s a strong thing. Everybody expects to succeed and achieve after high school.”

Becky said from the time Chad and Megan were young, she and JT instilled a sense of work ethic in them that would translate into a post-secondary education route paved by good grades and academic scholarships.

Chad and Megan both received near 4.0 GPAs in high school, spent time volunteering in the community and participated in a variety of school-related groups. They received numerous college acceptances and academic scholarships.

Their skills in baseball and softball garnered them sports scholarships, too. The mix of scholarships allowed most of Chad’s tuition and all of Megan’s tuition, both at Lake Michigan College, to be covered.

Still, the Buchanan Promise made a big impact on their lives, they said. It has allowed them to maximize their college experience, gain independence and, in the case of Chad, pursue a costly certification.

It allowed Chad and Megan to live in LMC’s dorms, and it will allow Megan to cover some of the future costs of a continued degree.

“There is not much pressure on my shoulders in looking for a four-year university, for me to worry about the cost of it,” Megan said. “Of course, I still do worry.”

That is because four-year programs cost much more than $10,000 for most students. The Buchanan Promise, however, can take a serious chunk out of costs and debt accumulated through two-year college, trade school and specialty school programs.

Paired with academic or athletic scholarships, debt can be near nonexistent.

That is not to say students will not struggle financially or academically.

“We always say [that] 90 percent of our days, we see 10 percent of the population,” Becky said on behalf of JT, who is currently Buchanan’s director of safety and services.

The Adkersons were grateful that the Buchanan Promise paid for educational opportunities outside of a four-year degree. Other Promise school districts, such as Kalamazoo and Detroit, do not.

Becky said she hopes the Michigan Gateway Community Foundation will work to better promote the Buchanan Promise’s ability to pay for education outside of a bachelor’s degree. Not everybody is interested in or suited for college.

“If they can learn a trade or a skill that’s going to earn them money beyond minimum wage, then in the long run, that’s going to trickle down into the community,” she said. “They’ll spend their money right here, buy a better life for themselves and their kids.”

Better promotion is on Habicht’s radar. He said since the Buchanan Promise had its first graduating class in 2017, Chad among them, a number of realizations have come to be that he is now addressing — working the Buchanan Promise is a bit like “flying a plane as they’re still building it,” he said.

Among Habicht’s work is addressing is encouraging all sorts of schooling, trade school in particular.

“Those are underserved. Those are under-sought,” he said. “So, lots of positions are available right now with nobody to fill them because [people] are not trained. We like to see students who are looking at that as an option.”

To do so, he launched Kickstart to Careers, which gives incoming kindergarteners a child savings account with an initial $25 deposit in a school district where over half of students qualify for free or reduced lunch. Students and families can make deposits in it that will in turn be used for post-secondary and career plans.

That makes a big difference to those who might otherwise flunk out of college or not pursue an education, he said. Giving money to graduates only works if ambition and ability are there.

Kickstart to Careers encourages that ambition.

To give students the ability to pursue education, Buchanan Community Schools is creating a new strategic plan, a series of commitments to its community and implementing a new teaching model. Uplifting all students, not just the brightest, is a focal point.

It is Habicht’s goal for the Buchanan Promise and its partner programs to give students expectations, support and habit-building skills all through the schools.

His goal? Have 100 percent of Buchanan students ready for post-secondary experiences.

“It’s pretty powerful when you think about it,” he said.

To supplement the goal, Habicht is considering tracking students who use the Buchanan Promise. Do they achieve their post-secondary education? How quickly do they use it?

The Buchanan Promise’s full effect is meant to be generational. The Adkersons expected the Promise has lead to more families moving into the school district.

Cathie Countess Waggoner, realtor for Berrien Property in Buchanan, said this could be the case. Many times, homebuyers do not cite all the reasons why they are moving, but last year, she sold a house because of the Buchanan Promise.

Since the inception of the program, the number of houses sold has hardly fluctuated, but Waggoner said that could be because there are not many houses on the market.

Becky, JT and Habicht said they can feel a change in the community. Families are staying in the school district. Graduates are pursuing careers. Young people are becoming less burdened by debt.

It all goes back to Schirmer’s original donation, Becky said.

“For [Schirmer] to value education enough to really build a legacy around education, I was really in awe of that,” Becky said.

“The fact that he had ties to Clark Equipment Company through his family kind of brings it full circle,” Habicht said. “The impact that Clark Equipment had on this community was, of course, very steep, and it’s no longer here. It’s having an impact today.”

So, too, is one big promise.