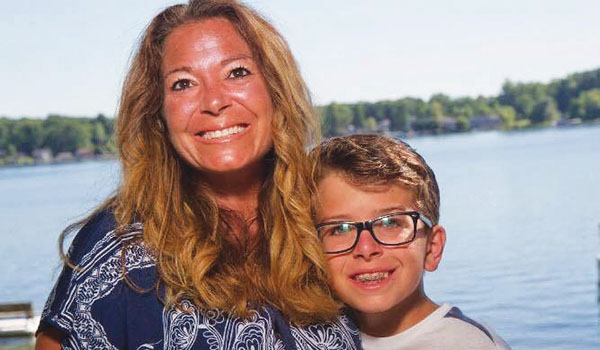 SISTER LAKES — Saturday, when the 6 o’clock whistle goes off, Julie Bovenizer will be on Round Lake with the song “Small Town,” a 1985 hit written by John Mellencamp, playing purposefully in the background.

Inspired by videos of quarantined neighbors singing to each other outside of their homes during the COVID-19 pandemic, Bovenizer, who has been visiting Sister Lakes since childhood, wants to see the community come together — while maintaining safe social distancing.

Last Saturday, Bovenizer launched the idea and was joined by several people, including Dockside Dan’s and friends down the street, who participated in playing and singing along to “Small Town.”

“This weekend, we hope for better weather and want more people to know now,” Bovenizer said.

Bovenizer, who is immunocompromised, knows the feeling of being quarantined. For the past year, she has done her best to self-quarantined to prioritize her health.

“My support system is the Sister Lakes community,” she said. “I knew whatever I needed, I could have here. Whenever I am here, people will call me when they are going to the store and pick things up for me.”

Fifty-seven years ago, her grandparents bought a resort in the area — Bove’s Resort. At 10 years old, Bovenizer’s father and his siblings separated the resort into individual cottages.

“I’ve been coming up here my whole life,” she said. “When I was younger, it was more working on the cabins. In the spring, we would come up every weekend and stay until before school started. This is where my heart is, and this is where I always come back.”

The same tradition has continued for Bovenizer into her adulthood and with her own son, as she feels the Sister Lakes community is just like the small town referenced by Mellencamp, which made the song choice an easy decision.

“When I am driving in Sister Lakes, that song is what I think of,” she said.

As she passes the blinking light entering the area, she knows she is home.

Already with local businesses forced to close and restaurants limited to only offering carryout options, Bovenizer has seen the community step up to take care of their own.

“Business owners take such good care of things when times are good,” she said. “We want to be there for them now.”

Bovenizer, who sometimes gets earaches, has developed a friendship with the staff at Sister Lakes Brewing Company, as she occasionally visits the brewery for fresh garlic to help heal the pain.

“I think with the shutdown, it’s just going to bring us together more,” she said of the lake community. “We are all from Sister Lakes in our hearts even though we are spread across the country.”

Bovenizer wants all of Sister Lakes to participate. For Sister Lakes neighbors, who hail from Florida, Texas, Oregon, California, Carolinas, Georgia, Indiana and Illinois, and may be quarantined in their homes, Bovenizer invites them to share their small-town singing act virtually.

On Saturday, Bovenizer plans to go Facebook Live during the three-minute, 41 second tune. She encouraged anyone in the area to turn the song on in their homes, car, at businesses or to head to Round Lake’s public beach — as long as people remain appropriate distances apart. Her hope is to see how far “Small Town” can travel over the lakes, and for the community to purposely enjoy a song together.

“It’s just thinking of life differently,” Bovenizer said of her small-town feat. “You take the extra steps and still enjoy the things that you love.”