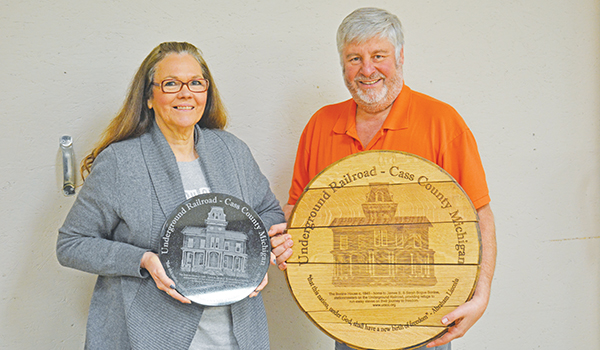 CASSOPOLIS — On a Thursday afternoon, Jeff Nelson, of Cassopolis, walked into a back room of his store and approached a large, orange and white machine, complete with several wires and tubes sticking out of it. He placed a small, blank piece of slate inside and pressed a few buttons, causing the machine to whir to life.

Within minutes, Nelson pulled the slate back out of the machine. While the slate remained intact, it now had the words “happiness is homemade” etched into its surface.

“We can do all kinds of really cool things with this,” he said, placing his hand on the machine’s lid. “You name it, we can probably etch it. … We make things personal, and personal is what makes it special.”

Now, Nelson is using his machine to benefit a local nonprofit organization.

Nelson and his wife, Cathy, are the owners of Bolt, a document management company that also uses laser etching to customize many products — anything from glasses and coasters to Christmas tree ornaments and more.

One of his most recent projects is creating two etchings of Cass County’s famed Bonine House, which was a spot on the Underground Railroad in the 1800s. One of the engravings, made of granite, will be auctioned off to support the Underground Railroad Society of Cass County. The other, etched into a whiskey barrel, will be put on display at the Bonine House.

Nelson got the idea to create the etching and use it to benefit the Underground Railroad Society after scrolling one day through a list he found on Facebook that named what each county in the state of Michigan is most famous for. When he reached Cass County’s spot on the list, its headline read “kitty litter” — the product was invented Cassopolis resident Edwards Lowe in 1947.

“It kind of rubbed me the wrong way,” Nelson recalled. “It would be one thing if they said Edward Lowe or the Lowe Foundation, but kitty litter? There is more to us than just that.”

After that, Nelson decided he wanted to bring more awareness to something Cass County can be proud of, and for him, that meant the Bonine House and the county’s history as a spot on the Underground Railroad. He received a picture of the Bonine House from Cathy LaPointe, of the URSCC, and got to work on creating the etchings.

“This is a part of Cass County history that we can rightfully be proud of,” Nelson said. “It should be celebrated.”

The granite piece will become a silent auction item that will be awarded to the highest bidder during the URSCC’s annual Underground Railroad Days festival in July. Until then, Nelson will also take bids by phone at (574) 522-6595.

An involved member of the community, Nelson said he believes it is essential to give back.

“We live here and are a part of the community, so this is just something small we can do,” Nelson said.