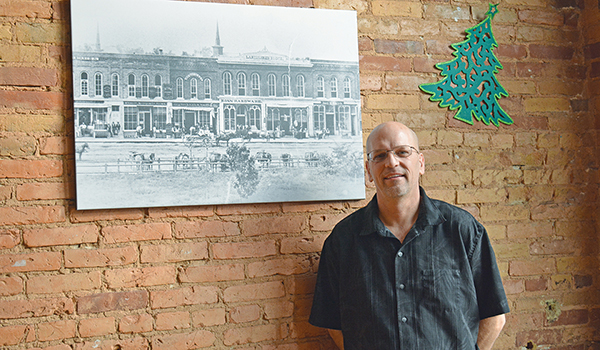 DOWAGIAC — When Cindy Brosnan, co-owner of Round Oak Revisited and Philo’s Pub, heard restaurants would be allowed to stay open for curbside delivery and delivery services, she went right to the source.

On March 16, Gov. Gretchen Whitmer ordered all bars and restaurants to shutdown dine-in services. Round Oak Revisited & Philo’s Pub, 137 S. Front St., Dowagiac, is one of several restaurants that has continued to serve the Dowagiac community by offering curbside delivery and delivery services during the COVID-19 pandemic.

“I went to the Van Buren/Cass District Health Department to make sure we were in compliance,” Brosnan said. “We were making sure. You can’t always trust what Facebook says. We can only have five people in the restaurant at a time to order, and they have to be 6 feet apart.”

The decision to stay open and continue to serve the public was not a hard one for Bronson, whose husband, Todd, co-owns the restaurant and pub.

“It wasn’t a difficult decision because there were so many people to feed — people who work in the service industry, medical professionals and first responders — but we’ve been able to get them fed,” Brosnan said.

The owners, who are taking it one day at a time, found that the restaurant received a lot of support from Dowagiac residents.

“We are making it kind of fun for the public,” Brosnan said. “We are offering less expensive entrees and specials on the non-alcohol beverages.”

With the unpredictability of the restaurant industry, Brosnan said the demand for carry-out food is there right now, but she does not know what is next.

Brosnan has also seen how the COVID-19 situation has impacted members of the public by not allowing them to host parties they had booked at the restaurant. However, Brosnan is confident her restaurant will have continued support after Whitmer’s stay-at-home executive orders are lifted, and daily life returns to normal.

“It was kind of disappointing for [members of the public] because last week alone we had a party of 125 booked, a party of 50, another party of 70 and various other large reservations,” Brosnan said. “They all exclusively said they would reschedule.”

Brosnan said despite losing St. Patrick’s Day revenue, which was a hit, her restaurant is no different than every other eatery dealing with the COVID-19 situation.

“We are taking every precaution and are following the health code, sanitizing and making it as safe as possible,” she said. “We are just walking through it, one day at a time.”

For Kyle Belew, owner of the Wounded Minnow, 236 S. Front St., Dowagiac, the decision to keep his restaurant open for delivery and curbside pickup involved many factors. Still, his main job is to ensure his staff and customers are safe.

“We take the necessary precautions that have been set forth by the CDC and the health department,” Belew said. “As this escalates, and if we see it more locally, I will close before I jeopardize employees’ or customers’ safety.”

Belew, who has owned Wounded Minnow for 25 years, said he is tweaking the restaurant’s menu, which is traditionally geared toward cocktails. Now that the restaurant is not open to the public, he is creating a more cost-effective menu.

Belew said the timing of the virus could impact restaurants and bars that rely on causal traffic.

“January to March is always tough,” he said. “A lot of people don’t realize how much traffic we get from Fort Wayne all the way over from Lafayette. Especially with motorcycle season, people stop by because of our outdoor seating.”

“When you get food to go, you should remove it from the container, throw the containers away, wash your hands, put it on your plate,” he said.

Also, instead of throwing food away, Belew said he has been dropping off salad kits and other food items to people and families in need.

“It’s a great time for people to take care of people,” he said.

“It was actually my chef who said, ‘We can do this,’” Hanner said.

At first, Hanner said that was the restaurant’s struggle, as delivery and carry out traditionally had been so little of his business.

“We cook with real wood,” Hanner said. “While the food supply is still really coming through, my wood supplier is not coming through. We have adjusted our menu because we have not been able to keep our wood fire oven lit.”

Hanner said the restaurant is operating week by week.

“Once we open again [today], we will be committed to the week, unless, of course, the state says we can’t,” Hanner said. “We sit-down at the end of each week and look over what has happened and what we can do differently. It’s been a huge adjustment to switch from sit down to takeout and delivery. It’s changed the entire model of our business in a matter of days.”

Overall, Hanner said the support of faithful customers, both new and old, had been wonderful.