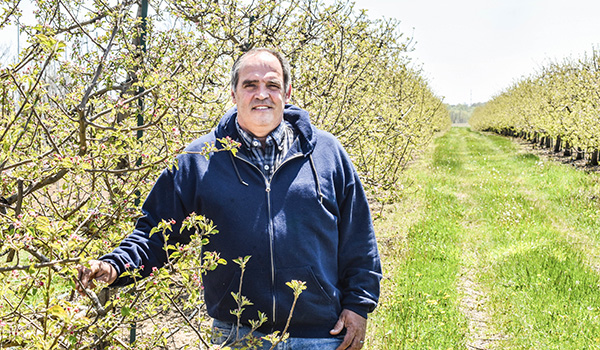 Fruit farmers hopeful frost will not prevent a successful crop

BUCHANAN — The spring weather has been slow to warm this year, with overnight lows that have dipped down into freezing temperatures. A frost over the weekend spelled some discouraging news for fruit farmers in the area with apple trees budding and slowly blooming.

According to the Michigan State University Extension Southwest Michigan fruit update on May 12, the freeze on Saturday, May 9, has caused damage to fruit crops in the region.

According to the update, temperatures for southern Berrien County were between 27 to 30 degrees Fahrenheit overnight on May 9.

Terry Holloway, of Holloway Apple Orchard in Buchanan and board member of the Berrien Conservation District, is no stranger to the ups and downs of the region’s weather. His parents moved to the area in 1968 and have had the farm on Smith Road since.

For Holloway, the frost over the weekend will have an impact on this year’s yield.

“There’s been damage to fruit crops,” Holloway said of the frost from the past weekend. “There will be less yield, certainly. There will probably be some crop there, just not full crops.”

With the location of Holloway Apple Orchard further south in Berrien County, away from Lake Michigan, Holloway said that his trees are subject to some cooler temperatures than farms closer to the lake. The lake’s temperature warms the air immediately surrounding it.

The king bloom, or center blossom, of the golden delicious trees at Holloway Apple Orchard show frost damage, but Holloway is optimistic since it is still early in the season.

“What we hope is that some of these other ones won’t be,” he said of the blossoms surrounding the king bloom. “We don’t need all the blooms to make a crop. We’ll have more fruit at the top of the trees than at the bottom, because it’s warmer.”

The trees have many blossoms budding and, when open, the blossoms will be the white apple blossoms many look for.

“You have to be positive about it and wait and see,” he said.

Holloway said that row crops, like corn and soybeans, are protected from the frost right now. Since the seeds have not produced a sprout above the surface yet, they remain unaffected by the frost.

“You never have a frost-free date until later in May,” he said.

Holloway said that because of the late spring, the apple crops will be pushed a little later into September.

“We’ve had some damage, but we’re still optimistic,” he said.