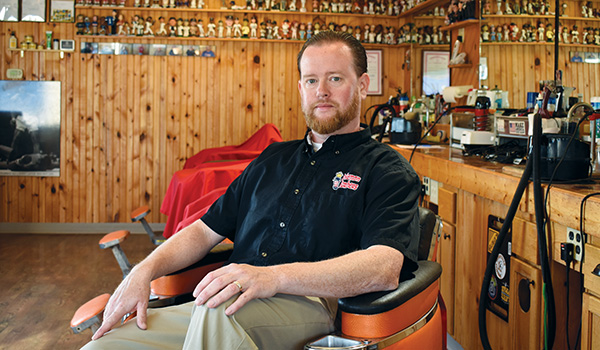 DOWAGIAC — When Gov. Gretchen Whitmer announced she would be reopening several sectors of the economy Monday, there was one hopeful industry that did not make the cut.

As the governor’s latest executive order continued to prohibit hair and personal care services, Michigan is now the only state in the country in which salons and barbershops remain fully closed. According to data collected by behindthechair.com, the majority of states have allowed salons to open, with California, Illinois, Oregon, New York, Pennsylvania and Washington allowing partial openings and New Jersey setting an opening date.

Now, Michigan barbers, cosmetologists and salon owners say they are frustrated with the governor’s decision to keep their businesses closed.

“You can go to northern Indiana to get a haircut, but you can’t get one here,” said Dowagiac’s Pat Bakeman, of Bakeman’s Barbers. Tuesday, he stood inside his empty barbershop, his orange styling chairs covered, as they had been for more than two months. “I love what I do, so not being able to work is hard.”

A few doors down the street, Jackie Riggs, owner of Front Street Salon, was disappointed she was not able to welcome back loyal customers to her downtown Dowagiac storefront.

“I felt very defeated yesterday,” she said. “I really was hopeful to take steps forward to reopening even if it would have been a lesser capacity.”

Both Riggs and Bakeman have felt the financial strain of being closed. They believe salons and barbershops can open safely with social distancing, enhanced safety and sanitation measures, by accepting clients by appointment only where possible and maintaining appointment and walk-in records. Bakeman is a member of the Safe Salons for Michigan coalition, which submitted an eight-step plan to Gov. Whitmer’s office that he feels would allow Michigan salons and barbershops to reopen safely. So far, Bakeman said the plan has fallen on deaf ears.

“The governor is not listening,” he said. “Now that we know what this is and the precautions to take, I’m confident we can reopen safely and handle any issues that come with it. … We are trained in sanitization and safety practices.”

Now, Bakeman said more than just the shutdown is threatening Michigan salons and barbershops, as a recently introduced bill might deregulate the industry.

On May 28, State Rep. Matt Maddock, of District 44, introduced House Bill 5819, which, if passed, would amend the occupational code to eliminating barbers and cosmetologists from individual licensing and registration.

Bakeman said he is against House Bill 5819, adding that licenses protect customers and barbers alike by ensuring proper training. He also believes it would harm newcomers to the industry by letting them enter the industry without training and forcing them to compete with larger companies.

“I’m strongly against deregulating, and if you ask any licensed barber or cosmetologist, they would feel the same way,” Bakeman said. “People think, ‘oh, my barber just cuts my hair,’ but there is more to it than that. … I feel like, right now, our governor doesn’t support us, and I can’t even call my state rep., because our state reps don’t support us, either.”

“House Bill 5819, in my opinion, makes no sense at all,” Riggs added. “We are a professional group of people that require a lot more training than most people realize. They have tried to deregulate us before. Hopefully, they are unsuccessful again.”

No sponsors for House Bill 5819 could be reached as of press time Tuesday.

Two months ago, Bakeman said he had no idea he would be fighting for his business against both the executive and legislative branches of government. He said barbers and cosmetologists are “caught in political crosshairs.” He worries that if salons open without government approval, they will be punished for violating the executive order and used as an excuse to deregulate the industry by House Bill 5819’s supporters.

“I don’t think any of us know what the right thing to do right now is,” he said.

As they wait to hear how House Bill 5819 will progress, both Bakeman and Riggs are eager to return to work.

“Hopefully, in the near future, we will be allowed to open,” Riggs said. “We are going to continue with our regular sanitation along with added measures such as face guards, single-use of capes and aprons, and a more rigorous routine for high touch areas like our stylist chairs and reception area counter.”

Bakeman, who has applied for an Indiana license should the shutdown last longer, has a long list of customers he is ready to call to schedule appointments with once restrictions are lifted. He said he has been receiving nearly a dozen phone calls a day inquiring about haircuts.

“People want their service, and I want to provide that service, but the government is not listening,” he said.