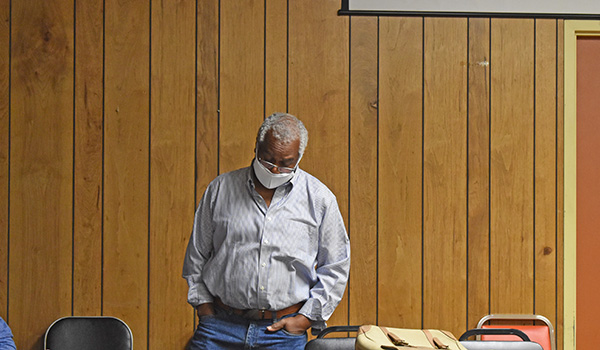 CASSOPOLIS — One newly formed committee is hoping to make a change in Cass County — one conversation at a time.

During a morning meeting Thursday, the newly formed committee, which includes representatives from Cass County administration, Woodlands Behavioral Health Network, the Cass County Medical Care Facility and county residents, defined its mission and put forward next steps to put that mission into motion.

The mission that was settled on during the meeting was to promote racial equality, social justice, diversity and inclusion through community education, with the tagline, “let’s have a talk.”

“The idea behind this was to bring social justice and understanding,” Dyes said. “Basically, we want people to talk to each other and see our similarities. A lot of it is based on the things that are happening right now in the world and moving the community forward through understanding.”

“I would challenge non-black members of the community to engage and understand and be conscious of what is going on and not to take a stance of ‘I’m not racist,’” added member Della Bundle. “To me, not racist is not good enough. Anti-racism is what we are looking for.”

During the meeting, several committee members spoke about their experiences regarding race in Cass County. African American committee members talked about what it is like to live as a minority in a majority white county.

Dyes, a farmer and the third African American commissioner in Cass County history, said he had experienced racism and inequality many times during his time living in Cass County. He believes the first step in combatting racism is finding commonalities between people of different races and starting a dialog to foster understanding.

“As a farmer, if I can talk to someone about a tractor, I can talk to them about anything,” Dyes said. “The problem is that most people feel, ‘oh, I have nothing in common with these people, so I can’t talk to them.’ But if I’m talking to someone about a tractor, they recognize, ‘Oh, he knows about Ford tractors, John Deere tractors, and he’s also a person of color.’ Then we can talk about everything else that is happening, but I can’t talk to him about the heavy stuff if we can’t talk about the little stuff first. We all have something in common.”

The next step for the committee will be to organize a community meeting, where both community members and experts can meet to discuss topics surrounding race, such as housing, education, reparations and more. Ideally, the committee aims to host its first meeting in early August in a large enough venue so that many people can attend while maintaining proper social distancing.

Dyes said the committee plans to host several meetings for the public to attend, both to receive community input and to educate residents on the topics and how they relate to race.

“We want to set up a dialog between the races so that we can understand our similarities,” Dyes said. “I think it is important that we have some experts come to state the facts, but we also want the residents to talk to each other and share their input.”

Though there is still a lot of work ahead of the committee to make its community dialogs a reality, Dyes and other committee members said they were optimistic that the committee could make real change in Cass County.

“We have an opportunity, and now is the time,” Dyes said. “I think the county is ready to move forward.”