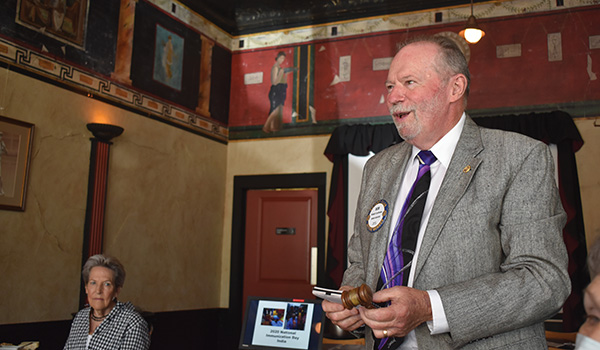 DOWAGIAC — With the passing of a gavel Thursday afternoon, a local club and volunteer organization is looking forward to a new year and new leadership.

At its most recent meeting inside downtown Dowagiac’s Woodfire Trattoria, the Dowagiac Rotary Club welcomed member Bob Cochrane as its newest president, taking over the reins from Melody Wallace. She served as president for the past year.

Cochrane’s recognition as the new president of the Rotary club was met by applause from Dowagiac Rotary members, his family and District Governor Margie Haas, who visited the club’s meeting to present a certificate of recognition for the club’s 100 years in Dowagiac.

Cochrane has been a member of the Dowagiac Rotary Club for 15 years and has been the club treasurer since July 2014. Before that, he was a member for 15 years, and at one point, served as president of a Rotary club in Omaha, Nebraska. Before his retirement, Cochrane served as the chief executive officer at the Cass County Council on Aging.

In her introduction of Cochrane as the new president, out-going president Wallace said she believed Cochrane would continue to push the Dowagiac club in a positive direction under his leadership.

“I want 2020-21 to be a year of opportunity for you, for this Rotary club,” Wallace said. “[Cochrane] comes with a great wealth of experience. … I have come to appreciate his vision and wisdom on the board. I know his plans for the 2020-21 year will be thoroughly led and executed.”

In his first act as president, Cochrane gave back to Wallace by presenting her with a plaque and past president pin on behalf of the club.

“Melody Wallace has been the president of this club for the past year, and it has got to be the most trying and unique Rotary year ever, and Melody stayed right on top of it all and kept us together and kept us moving,” he said. “She certainly deserves our thanks and praise for what she was able to do.”

With his first order of business out of the way, Cochrane said he plans to focus his efforts on increasing club membership and improve the club’s visibility in the community.

“We have a great core of people, but we want to build on that,” he said. “We also want to make people more aware of the things that Rotary does.”

As he works toward those goals, Cochrane said he is excited to serve the club as its newest president.

“I think it is a marvelous opportunity to work with a great bunch of people to serve our community and the world community,” he said.