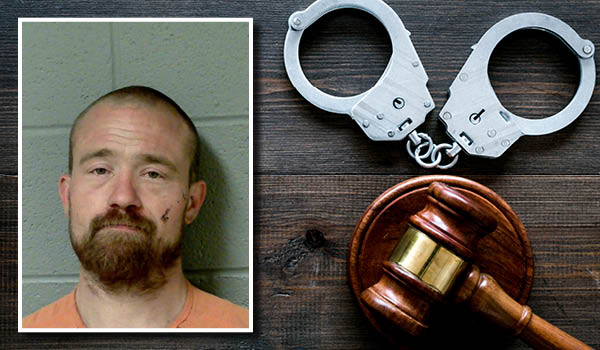 CASSOPOLIS — A Dowagiac man who shot into the ground at his wife’s feet earlier this summer was sentenced Friday in Cass County Circuit Court to probation, jail and tether.

Christopher Louis Dryden, 29, of Rudy Road in Dowagiac, pleaded guilty to attempted assault with a dangerous weapon and was sentenced to 18 months’ probation, 120 days in jail with credit for 47 days already served, 120 days tether and $2,148 in fines and costs.

He also pleaded guilty to possession of a firearm under the influence of alcohol and was sentenced to credit for 47 days already served, $300 in fines and costs and forfeiture of weapon.

The incident occurred June 14 at a home on Rudy Road in Dowagiac. Dryden’s wife called police after he shot into the ground at her feet during an argument. His blood alcohol level was found to be .11 which would have been above the legal limit if he had been driving.

Three other charges were dismissed: one count of assault with a dangerous weapon, one county of domestic violence and one count of reckless use of a firearm.

Dryden’s wife asked for and received a lifting of the no contact order between her and her husband.

“This time in jail has given him the time to reflect on the man he wants to be,” she said. “I ask that you allow us to be together. His sons and I miss him so much. Together we can overcome his alcoholism.”

Cass County Prosecutor Victor Fitz called it a dangerous situation with Dryden drunk and then using a gun during an argument.

“I’ve seen murders and many domestic violence cases where guns are introduced and there’s an escalation,” he said.

“The victim is very forgiving, and that’s not a bad thing,” he added. “If a family gets back together, that’s a great thing but it should only happen if he deals with his alcohol problems. He also can’t handle guns.”

Dryden said he will not drink again and will not have guns.

“Actions speak louder than words,” he said. “Given the opportunity, I can be the husband and father I should have been. There will be no more drinking and guns in the future.”

Cass Circuit Judge Mark Herman told Dryden he was setting a poor example for his children. “This is a poor example for your three young boys,” he said. “I’ve seen more than my share of accidental shootings where people have been drinking and firing guns. Horrible things can happen, nothing good ever comes out of it.”

Also Friday, a Dowagiac woman was sentenced to probation for an assault on her young son.

Briana Mitchell, of Vineyard Place in Dowagiac, pleaded no contest to domestic violence-assault and battery and was sentenced to 12 months’ probation and $600 in fines and costs.

The incident occurred Nov. 18, 2019, at a location in the city of Dowagiac. Her young son was injured in the incident and received broken bones. Two counts of child abuse were dismissed as part of the agreement.

In other sentencings, area residents were given sentences on drug offenses.

His probation was revoked in both cases. His probation agent said he had exhausted all the services her department can offer him. He has absconded from the Twin County Probation Center twice and also not been successful in other treatment programs.

Michael Steven Ferrell II, 37, of Korn Street in Niles, pleaded to possession of meth and was sentenced to two years’ probation, credit for 16 days served and $2,768 in fines and costs.

The incident occurred March 10 when police were called to the Michigan Department of Corrections probation office on M-62 in Cassopolis. Ferrell was found to have meth in his wallet.

Judge Herman gave him the chance to continue his special probation status in a July, 2019 case which will allow him to keep two felonies of possession of meth and possession of analogues off his record if he completes that probation successfully.

“You will have one felony on your record and down the road you could have it expunged,” the judge said. “But if you violate your probation again, I will give you a year in jail and you won’t have custody of your son. If you want to be a father to your son, step up to the plate and be a father and make your son your priority in life, not drugs.”

The incident occurred May 22 near Edwardsburg when police stopped him. Two counts of resisting and obstructing police, one count of unlawful use of a license plate and one count of operating a motorcycle without endorsement were dismissed.