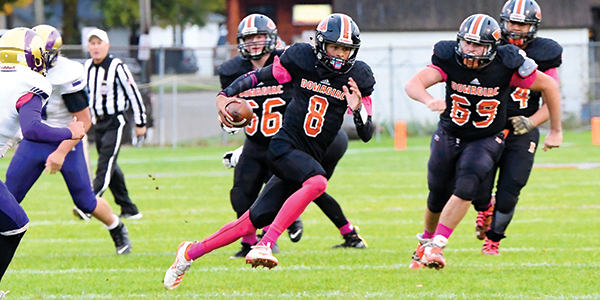 The MHSAA announced that it is moving football to the spring due to the COVID-19 pandemic. (Leader file photo)

NILES — The news that most everyone has been waiting for arrived Friday afternoon when the Michigan High School Athletic Association announced it was moving football to the spring sports season.

The MHSAA has been working through various scenarios all summer long as to how to safely have fall sports during the coronavirus pandemic. Last week, the state announced that low-risk sports such as girls golf, boys tennis and cross country could begin practices on time this week and begin competition next week.

For football, that decision came Friday. A decision on volleyball and boys soccer will come no later than Aug. 19, according to the MHSAA.

MHSAA Executive Director Mark Uyl and the MHSAA Representative Council tried all summer to find a way to have three traditional sports seasons in Michigan, but following a survey that was sent out to all the athletic directors in the state and a meeting of the representative council Friday morning, MHSAA leaders decided it was best to do was move football to next spring.

“At the end of the day, we did everything we could to find a path forward for football this fall,” Uyl said. “But while continuing to connect with the governor’s office, state health department officials, our member schools’ personnel and the council, there is just too much uncertainty and too many unknowns to play football this fall. No one is willing to take the risk of COVID being passed on because of a high-risk sport. Decisions have to be made on our other sports as well, but none of those carry the same close, consistent, and face-to-face contact as football.”

In mid-July, the MHSAA announced it would move forward with its traditional sports calendar. It also said that moving some or all of the fall sports was on the table.

Currently, regions that are still in Phase 4 of Gov. Gretchen Whitmer’s Mi Safe Start Plan cannot play volleyball or have swimming and diving competitions. The MHSAA remains in close contact with the governor’s office and expects more information regarding the use of indoor facilities coming soon.

The MHSAA will announce details for a spring football season over the next few months. The state is trying to limit the amount of overlap between football and traditional spring sports.

This is a developing story. Check back for updates, including reactions from both athletic directors and coaches.