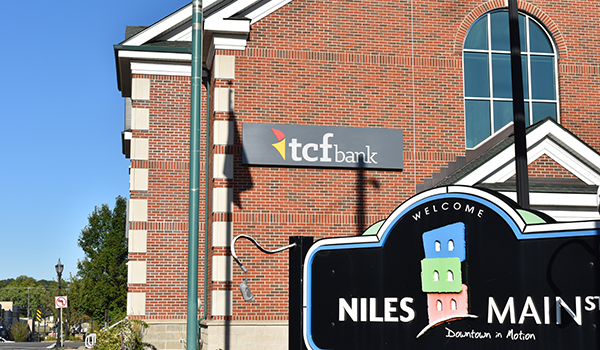 SOUTHWEST MICHIGAN — The bank sitting at the corner of Main Street and North Fourth Street downtown has a new look. Gone are the familiar dark and light green logos and signs the Chemical Bank had on its brick exterior. In its place, a yellow and red logo remains.

Last month, the Chemical Bank branding was officially retired and the TCF National Bank signs took over the original signage. The former Chemical Bank, 401 E. Main St., in Niles, as well as the bank located at 114 Commercial St., in Dowagiac, were two of 200 banks in Michigan and Ohio that was affected by the rebranding as the two companies finalized the integration of their separate entities.

Krista Flynn, regional president for TCF National Bank West Michigan, said the integration has had lots of parts, and the signage is just the most recent update.

One of the newest things the bank’s customers are experiencing, aside from the branding shift, is the bank’s app.

She said that about 80 percent of the bank’s regular customers have downloaded the app.

“The app is a big change,” Flynn said. “It’s the most visible change, and highly used. TCF moved over to the Chemical Bank checking and loan system. So, we have upgraded capabilities.”

In a release on Aug. 10, Randi Berris, senior vice president and director of corporate communications, said the TCF Financial Corporation would soon have a new headquarters in the heart of Detroit.

“[Aug. 1] is a historic day for the new TCF, and we want all of our customers to know that with the final step complete in the merger of equals, we remain deeply committed to the communities where we live, work and serve,” said Craig R. Dahl, president and chief executive officer of TCF Financial Corporation in the release.

The new company, as the two banks were equal parts in the integrations, has a tagline of “What’s in it for We?”

Flynn said the tag was welcomed by everyone working on the inside of the companies as they were figuring out “who” they were after the merger. The shutdowns from the pandemic made it even more imperative that the staffs work together toward one goal, according to Flynn.

“It really struck a chord with employees,” she said. “This isn’t about me or you. What’s in it for us?”