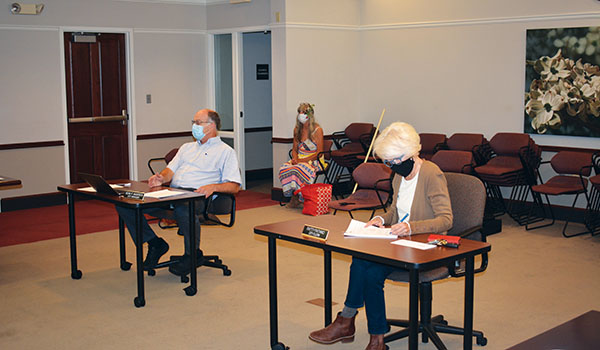 DOWAGIAC — The site of the former ICG building could soon be put to use by Dowagiac Union Schools.

The new parking lot would be built on the site of the former ICG building, located between Chris Taylor Alumni Field and the high school campus. The resolution is subject to the approval of the Dowagiac Union Schools Board of Education.

The city has solicited proposals for creating parking spaces and open spaces for the high school campus and will make the improvements, and the district will pay for the improvements over a 10-year period.

According to City Manager Kevin Anderson, Lounsbury Excavating has the lowest and best proposal for this project.

“We are familiar with the company because they were the contractor for Russom Park improvements several years ago,”  Anderson wrote in a memo to the council. “The bid is complete, and the school district is considering the final safety measures for the north wall.”

As the school district is responsible for the design meeting their specifications, the council had to authorize the bid contingent upon school district approval of final design. The school board is set to vote on the resolution during next Monday’s board meeting.

If the board approves the final design proposal, Anderson said construction could begin as early as mid-October and will likely go into the spring.

“Most of the heavy lifting for the project will be the construction crews to clean up the removal of blacktop,” Anderson said. “The movement of dirt and all of the fencing should be done during this construction season, but it won’t be done in time for the grass to grow and some of the landscaping.”

Anderson said the new space would become additional parking for sports events, and the school will be able to use Northwest Park on the other side of the street for ongoing athletic activities. The proposed parking lot will have 211 parking spots, and the final cost will be less than $300,000.

“The abandonment of Poplar Street through there will be a part of this project, as well,” Anderson said.

In related business, the council unanimously passed a resolution authorizing both the demolition of a building at 135 S. Front Street and improvements for Beckwith Park.

According to a memo sent to the council by City Manager Kevin Anderson, bids for the demolition of 135 S. Front Street have been received, and the lowest and best bid for demolition is McDonald Underground. Lounsbury Excavating, which also submitted a proposal for the DUS parking lot project, was the lowest and best bid for the Beckwith Park improvements, which include the compaction of soils, adding four parking stalls, returning the memorial bricks to a patio, relocating public art and adding benches and tables while retaining open space for larger gatherings and community events.

The estimated cost for demolition and improvements is $200,000, and the project is slated to begin in early October.