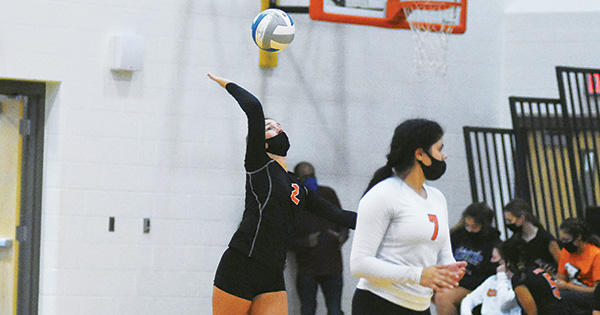 Caleigh Wimberley (left) had 28 digs and four kills against Plainwell, while Allie Conner had 23 digs. Dowagiac lost to the Trojans in five sets. (Leader photo/SCOTT NOVAK)

Chieftains fall to Plainwell in five, play well at quad

DOWAGIAC — It was a battle until the end between visiting Plainwell and Dowagiac in its Wolverine Conference match Thursday night.

Dowagiac coach Tony Hooley was disappointed with the end result.

“This one stung a bit,” he said. “The whole night was a roller coaster from start to finish as we struggled between ball control and offense.”

Hooley continues to be pleased with junior Megan Davis, who tied with sophomore Alanah Smith with eight kills apiece. Davis also had 18 digs and five aces.

“Megan had a very nice match and was definitely our most consistent attacker and server, while Alanah Smith had somewhat of a coming-out party with easily her best performance of the season in the middl,” Hooley said.

Other statistical leaders for the Chieftains were Riley Stack with six kills, six digs and two aces, while Jessie Hulett had 20 assists, a kill, two aces, 12 digs and a block. Allie Conner finished with 23 digs to go along with an assist, a kill and an ace. Caleigh Wimberley finished with a team-high 28 digs. She also had four kills.

Moving forward, Hooley knows his team has to develop more consistency and be more aggressive up front.

“There were several nice defensive, scrappy plays in the match, but our overall passing was erratic, and our blocking was close to non-existent for the second time this week,” he said. “We need to take what we can out of this match, learn from it and keep pushing forward. There will be better results to come if we keep working hard.”

“Overall, it was a good day for Dowagiac volleyball,” Hooley said. “Volleyball can be a game of peaks and valleys, and today had more peaks than valleys. I felt that several players gained valuable experience and became smarter players, especially as hitters. My three pin players, Megan Davis, Caleigh Wimberley and Riley Stack had big days and are starting to tip and roll shots along with their power attack. Their shot direction and control improved as well.”

That trio combined for 69 kills, five blocks and 78 digs.

“We were just a little off tonight,” Hooley said. “We didn’t pass bad, but we weren’t sharp either. Several players seemed a half step slow and our communication wasn’t as good as it needs to be. We are not tall enough to lose at the net and on the floor and expect to win the match.”

Wimberley finished the match with 10 kills, 16 digs and five aces, while Davis had eight kills and 16 digs. Conner finished with 8 digs. Hulett had 25 assists.