Chieftains fall to Plainwell in five, play well at… 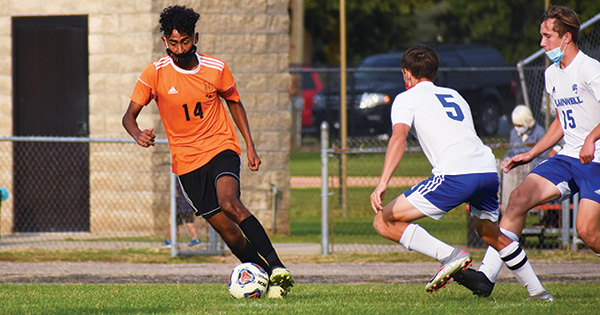 The Chieftains, who rebounded from a 2-0 loss to Plainwell last Thursday, played well, according to Dowagiac Coach Mike Williams.

“We moved the ball well around the field and were able to finish in the second half,” he said. “We need to continue to work on finishing and playing a full 80 minutes at the same level.”

Nate Judd opened the scoring with a goal in the 45th minute. Isaac Saavedra scored a pair of goals — in the 50th and 55th minutes — to seal the victory for the Chieftains.

A pair of goals in the final 16 minutes gave visiting Plainwell a 2-0 victory in the battle between the top two teams in the Wolverine Conference standings Wednesday.

The Trojans came in with a 3-0 record, while the Chieftains were 3-1.

Plainwell continues to lead the boys soccer standings with 12 points, while Otsego (3-0-1) is second with 10 points. Allegan (3-2) and Dowagiac are tied for third with nine points. Paw Paw is fifth with eight points.

After a scoreless first half, the Trojans scored the game-winning goal with 16:07 remaining in the match. Plainwell added another goal late to complete the scoring.

Chieftain coach Mike Williams said his team played well, especially in the first half. However, with a lack of experienced subs to send in, the Trojans wore his team down.

“We actually played really well,” he said. “It was our best game of the year overall.”

Williams said that Plainwell has yet to give up a goal this season.

The Dowagiac soccer team returns to action today as it hosts Otsego in a Wolverine Confrence match.

Play is scheduled to begin at 5 p.m.