Dowagiac’s beloved candlelight parade will march on with COVID-19… 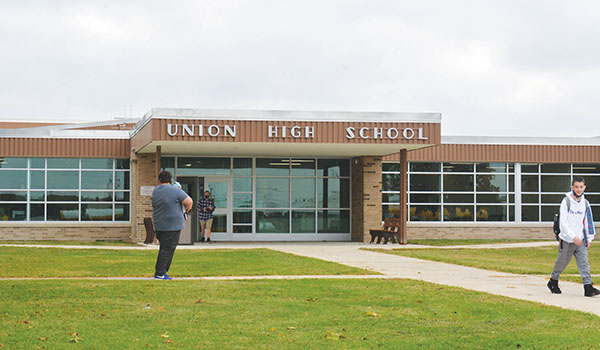 DOWAGIAC — Buses were boarded and parking lots were packed Monday as Dowagiac Union Schools students returned to classrooms for the first time in more than six months.

The DUS Board of Education voted Sept. 28 in favor of returning to full-time, in-person instruction beginning Monday.

According to the district, two staff members tested positive for COVID-19 last week. The district has used the past two weeks to prepare for the students’ return, including purchasing electrostatic sprayers to disinfect its buildings as well as plexiglass dividers to be used in cafeterias and classrooms to prevent droplets from spreading.

Superintendent Jonathan Whan made the rounds to every school building in the district and received positive feedback from both teachers and students.

“I really do think it’s been a great start,” Whan said. “Students have been very respectful and cooperative. It’s a new world we’re living in, and I think our community is stepping up well. All the credit to students, parents and staff.”

“It’s been an exciting time,” said Stone. “I’m thrilled to have students back, and the teachers are happy to see them. The kids are doing a fantastic job and are ready to learn. We’re happy to have them back and continue where they left off from distance learning, and we appreciate everyone’s patience and support as we move forward with face to face learning.”

Stone has been impressed with the students’ behavior and cooperation during this transition.

“They’ve been wearing masks, washing and sanitizing their hands and have been sitting in their assigned seats at lunch,” Stone said. “They’re doing a fantastic job.”

According to Stone, the distance learning period allowed teachers and students to prepare for their eventual return to classrooms.

“The teachers and students were able to talk about expectations for the classroom when face-to-face learning resumed,” Stone said. “One of the big changes from last year to now is that students eat breakfast in the classroom this year. Kids go right from the bus to their classrooms with their cohort to eat instead of the cafeteria.”

As a bus driver for Dowagiac Schools, Victoria Bickham has a unique vantage point when it comes to students not being supervised by parents or teachers. According to Bickham, the bus route to school Monday morning went smoothly.

“The students got on the bus this morning, and they wore their masks when they got in and when they exited,” she said. “They complied with the rules that we have. It was a success this morning.”

Stephanie Hall-Garrelts is a parent of a Dowagiac Middle School student. She said her son had a good first day of in-person learning.

“My son told me it went better than anticipated,” Hall-Garrelts said. “He was nervous this morning but was excited to see his friends.”

Hall-Garrelts is a utility aid at Justus Gage Elementary School. She was impressed with the way the students conducted themselves.

“I thought it went really well,” Hall-Garrelts said. “It went way better than what I anticipated. We were all kind of nervous because we just didn’t know what to expect. Everyone kept masks on like they’re supposed to. It was great, especially with that age group. The kids getting on and off the bus today went really smooth.”

Hall-Garrelts knows there will be bumps along the way, but remains optimistic after experiencing the first day back in school.

“It’s just a matter of us getting into a new routine,” she said. “It’s gonna take a good week or two to get into a rhythm. Once that happens, things are gonna go a lot smoother.”

Instead of having their children return to school, Beth Clark and her husband, Cori, opted to withdraw their children from the district and home school them this semester. Clark has one sixth-grader and one kindergartener.

According to Clark, Gov. Gretchen Whitmer’s mask mandate and the inability to switch academic plans were key factors in her decision to pull her children from the district for the semester.

“Parents had to commit to either the distance learning plan or the virtual plan,” Clark said. “We knew the virus isn’t going to just go away. If it doesn’t spread in the schools, then we know that the schools are doing what they’re supposed to be doing and are able to contain it. But then we’ve seen all of these surrounding schools and what they’re dealing with, so we feel like we did make the best decision for our family.”

Clark said her children are enjoying the academic attention they are receiving from home.

“I feel like my kids are benefiting from the one-on-one attention,” Clark said. “Interaction from someone that they know when they can trust, that’s like a huge, huge thing with my kindergartener. At school, the teacher’s attention is divided, but not here. We don’t have to worry about social distancing or wearing a mask.”

Clark said that her children will return to school once she feels that it is safe for them to do so.

“We chose to homeschool because now we can pick if and when they go back,” Clark said. “It’s the fear of the unknown. This is his first year in junior high. The biggest impact that today had on him was that he knew that some of his friends were gonna be back in school without him. We don’t want to throw them to the wolves right now when there’s so much uncertainty.”

“I wanted to keep him on a consistent plan for the entire semester,” Blauer said. “I can help him in the evening and on weekends when he needs it. The program is working well for us and gives me some peace of mind concerning his schedule and also his well being.”

Blauer said that her son is working at his own pace and must complete 18 weeks of work by the end of the semester.

“We have scheduled play dates with another virtual student,” she said. “They meet once a week outdoors. We social distance and wear masks. I think it is important that he not feel too isolated. I’m glad that this option was offered by the district.”