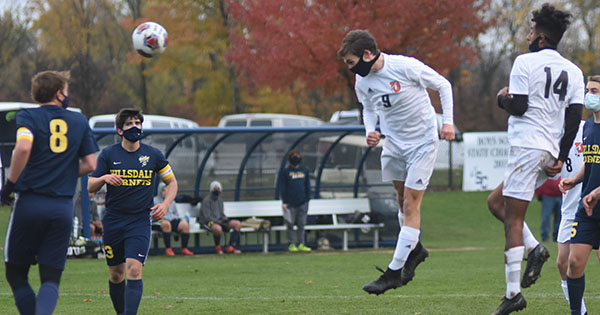 BYRON CENTER — Despite having two of its top scorers out of the lineup Tuesday night, the Dowagiac soccer team blanked Hillsdale 3-0 in the Division 3 Regional semifinal hosted by Grand Rapids South Christian.

With Cole Weller and Noah Green back in Dowagiac, the Chieftains lost Jordan Simpson to injury in the semifinal match’s opening minutes.

Even that could not keep the Chieftains from scoring early and seizing the momentum.

In the sixth minute, Dowagiac made it 1-0 as Ethan Hannapel headed a corner kick from Gustavo Cruz past the Hillsdale keeper.

“It is always good, so they can relax,” said Dowagiac coach Mike Williams about scoring the first goal. “That way, we did not start playing a kickball game or something like that, like the pressure of the South Haven game where we played completely out of our game. This game here, you saw we controlled the middle and attacked, fed out and attacked in.”

The Chieftains (13-2-1) would keep the pressure on throughout the half, upping its advantage to 2-0 when Freddy Brito beat the Hillsdale keeper off a pass from Cruz with 15:52 remaining in the half.

It took less than a minute into the final second half for Dowagiac to make it 3-0 when Alex Hernandez hit Isaac Saavedra with a pass in the middle that he finished for the goal.

Like the first half, Dowagiac spent most of the final 40 minutes playing at the Hillsdale end. Chieftain keeper Alejandro Martinez faced eight shots the entire night, all of which he stopped. Dowagiac finished with an 18-8 advantage in shots on goal.

Dowagiac will again be without Weller and Green as it faces the defending state runner-up and regional host South Christian at 6 p.m. on Thursday.

That means players will need to continue to play well in their absence.

Williams was pleased to see his team pick up another win in the regional round, which has not been kind to the Chieftains, who usually face one of the top teams in the state or the team that either wins the title or finishes as the runner-up.

“Like I said before, every extra game is fortunate at this point,” he said.