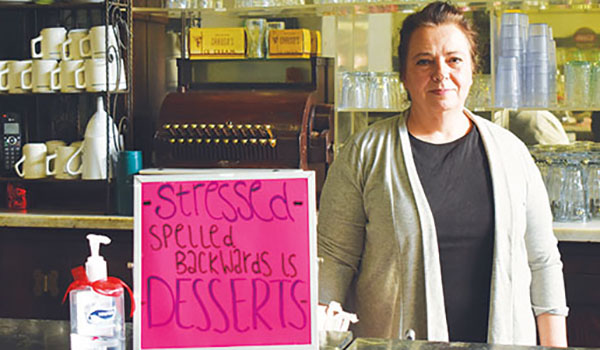 In an effort to combat the rising COVID-19 cases statewide, Gov. Gretchen Whitmer and the Michigan Department of Health and Human Services issued an emergency order to take place for three weeks, beginning Wednesday, to limit indoor social gatherings and other group activities.

Among the list of restrictions is a three-week closure of dine-in service at bars and restaurants across the state.

“It’s obvious that the cases are kind of skyrocketing right now,” said Howard Tuthill, co-owner of Iron Shoe Distillery, 3 N. Third St., Niles. “It is worse than it was at the beginning of the pandemic. It’s intimidating.”

While Tuthill acknowledged the seriousness of the pandemic, the livelihood of his family and restaurant staff will be impacted by the closure of the indoor dining space.

“It’s difficult because you want to do the socially responsible thing and make sure people aren’t overexposing themselves,” Tuthill said. “But this is also people’s incomes and livelihood that we have to worry about. Dine-in services will be closed, and that hurts the majority of staff. It puts us in a bad spot.”

According to Tuthill, the distillery’s hours will remain the same during the three-week closure.

“We have our online ordering platform available, as well as call-in orders,” he said. “We try to make it as easy as possible for people to place orders.”

Tuthill said that if there is a silver lining, it is that he and his team are more familiar with how to make the transition after doing so at the onset of the pandemic.

“This time around it’s not as big of a surprise,” he said. “It was more of a shock last time because we had to figure out how to operate but this time we know how to approach it. We will take it in stride. Hopefully in a few weeks, we will be back to normal.”

Less than a 20-minute drive away, Caruso’s Candy and Soda Shop, 130 S. Front St., Dowagiac, will offer carryout during the three-week closure of dine-in service, according to owner Julie Johnson.

Dine-in regulars will be among the things Johnson will miss the most during the closure.

“It does hurt business not having people come sit down,” she said. “I have a group of gentlemen who come in six days a week for morning coffee. They look forward to that every day as part of their routine. During the first shutdown, I was able to put some seating outside, but we can’t do that this time due to weather. We won’t be able to accommodate them.”

For Johnson and many other business owners, social media has been an important tool during the pandemic.

“Facebook is a powerful way to get the word out,” she said. “I encourage people to follow businesses on Facebook, and to call ahead to stores because things are changing daily.”

Johnson has been moved by the support her business has received from the community and encourages people to support small businesses in the area.

“People are exploring downtown more because they’re staying home more,” she said. “It’s amazing how so many people live in Dowagiac have never walked the downtown strip. There are a lot of cute shops. You’ll be amazed at what you can find.”