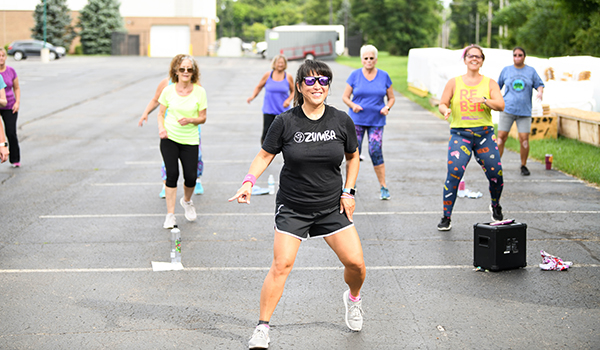 Daysha Amster, of Body Movement Fitness, called her local health department after the pandemic order was handed down on Sunday evening. Since the phone call, she has taken her group fitness classes outdoors while the weather allows. (Leader photo/EMILY SOBECKI)

NILES — The latest pandemic order given by Gov. Gretchen Whitmer and the Michigan Department of Health and Human Services on Sunday called to put a pause on things like large public and family gatherings, sports and entertainment venues. While fitness gyms may remain open with capacity and spacing limitations under the order, group fitness classes were put on a three-week pause to help control the spread of COVID-19.

Larger facilities, like the Niles-Buchanan YMCA, adhered to a complete pause on group fitness classes.

“Our priority is the health and safety of our members, guests and staff,” said Marketing Director for the YMCA of Greater Michiana Kayla Foster. “We’re happy to remain open, but will no longer offer group exercise classes or organized sports for the next three weeks.”

The YMCA will continue offering its virtual classes, and Foster encouraged members to continue their individual fitness.

Meghan Engledow, owner of Wrapped in Light LLC in downtown Niles, opened the doors to her yoga studio just 30 days before the order was announced.

“I’ve had so many brand new people in yoga that have come to every class,” Engledow said. “My biggest fear is losing them, and them getting out of practice. I just want to try to encourage them.”

“I taught up until [Tuesday]. That class was the last class for now,” Engledow said.

With the three week “pause” on business, Engledow said her children were also doing remote learning due to a separate decision in their school district, making remote classes difficult.

“Multiple people have asked for my whole schedule to be streamed online, like I was doing in person. But with the kids being thrown into e-learning, I’ll just be able to have Saturday morning Zoom classes” she said.

In the meantime, Engledow is hoping to support her students as much as she can, while also doing some of the background work in her business. She said she had done a few video recording and streaming yoga classes in the past when she was doing her yoga teacher training, but much prefers teaching in-person.

“But some yoga is better than no yoga, so everybody has to be patient,” Engledow said. “I found yoga with YouTube, so I will support doing yoga over the phone or internet.”

Between remote learning and business paperwork, Engledow is planning to work on finalizing some of her retail products for the studio, as well as continue with her crystal, wire-wrapping offerings on Wrapped in Light Design.

“Luckily, I am doing alright,” Engledow said. “I don’t regret opening. I think the world needs yoga more now than ever.”
Another group fitness instructor, Daysha Amster, owner of Body Movement Fitness, is working hard to adapt her offerings while the November weather holds. Upon hearing the order calling for group fitness classes to pause, she began looking for alternatives.

“It didn’t make any sense to me. For restaurants, outdoor seating is fine. It’s nice enough for us to exercise outside,” Amster said. “I called the health department immediately to see if we could do that, because we have been running them outside. [The outdoor classes] have been so successful and safe. It’s healthy to move.”

With the local health department’s blessing, Amster will move her class offerings into the open air as long as it is warm enough to do so.

“We had already been going virtual anyway,” she said, of Brandywine Middle/High School. What she did not expect was for group fitness classes to be paused, since they were just brought back in a previous order.

With Zoom, Amster feels like she loses some of the connections with her students. She loves to interact during the class and engage the room. She offers Zoom classes for those who are most comfortable with that approach, but notes that it is not accessible to everyone.

“Not everyone has the right internet or right device,” she said. “As long as we can be in person, it really does help out a lot. As long as we can operate outside, hopefully in the next three weeks, we can go back [to indoor classes] safely.”