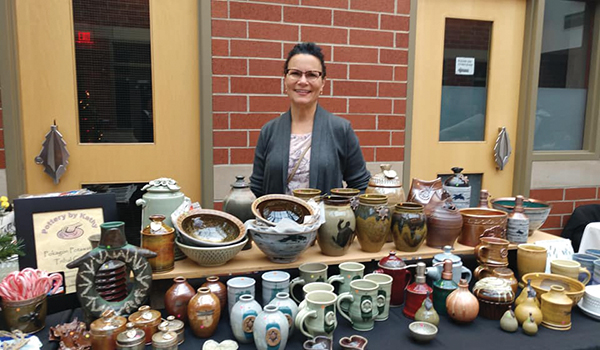 Pictured is a seller from a previous event. This year, the Art Extravaganza is going virtual.

In light of the ongoing COVID-19 pandemic, the annual art show will begin Saturday, Nov. 28 on Facebook and last through the holiday season.

Hosted by the Pokagon Potawatomi Tribal Art Review Committee, the show will allow tribal artists to showcase and sell their art on the Pokagon Virtual Art Extravaganza Facebook page, which will be open to the public for all to see and purchase Nov. 28. A wide range of art will be featured for sale, including pottery, jewelry, beading, wood-burning, basketry and more.

“The artists look forward to it because it is a lucrative sale,” said Angela Rice, chair of the Pokagon Potawatomi Tribal Art Review Committee. “We decided that we still wanted to host it this year, and came up with a virtual show. We usually have around two dozen artists participate. We’re hoping for more this year.”

According to Rice, the immediate response to a virtual show was a positive one.

“People are happy to have an outlet,” she said. “Everything has been canceled this year, so people are excited to take part. Ever since I announced we were doing a virtual show, my phone has blown up with emails. We’re hopeful that this is going to be a big deal.”

According to Rice, the art show is typically held at either the Pokagon Band Community Center, 27043 Potawatomi Trail, Dowagiac, or at Dowagiac Middle School, 57072 Riverside Dr., Dowagiac.

“When it’s held at the community center, we would see a lot of community citizens,” Rice said. “When at the middle school, we would see anywhere between 100 and 200 people during the four hours the show was taking place. It was gaining momentum as the years went on.”

Rice hopes the virtual nature of this year’s show leads to an increase in visibility for the artists.

“Hopefully this will give them a much wider reach,” Rice said. “They can share and exchange their Facebook pages, art pages, websites, and much more. Everyone is looking forward to it.”