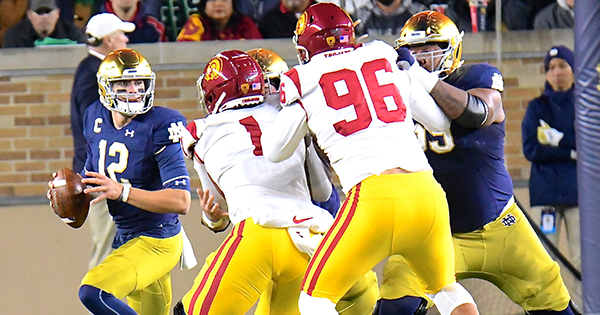 NOTRE DAME, Ind. — Leading the Irish to a 31-17 win over No. 19 North Carolina Friday, graduate-student quarterback Ian Book was named to the Davey O’Brien Award Great 8 List for Week 13.

In Notre Dame’s ninth-consecutive win of 2020, and 15th-consecutive overall (the longest streak in the FBS), Book went 23-of-33 for 279 yards and a touchdown with zero interceptions. He also added eight rushes for 48 yards.

Book finished the day without any turnovers, giving him 237-straight pass attempts without an interception. It ties for the longest active streak among all FBS quarterbacks, and is the longest streak in Notre Dame history, topping Brady Quinn’s 226.

Book posted a season-long 33-yard run against the Tar Heels, the longest run by a starting quarterback in the ACC this week.

He quarterbacked the Irish to four touchdown drives of at least 75 yards Friday, including a season-long scoring drive of 97 yards.

Book led the Irish to 478 yards of total offense against a UNC defense that entered the game allowing 413.6 yards of offense per game, and the Irish continue to boast the best time of possession average in the ACC, controlling the ball at a rate of 34:12 minutes per game with 35:04 at North Carolina.

The Irish return to play Saturday, to close out their home schedule as they welcome Syracuse at 2:30 p.m. on NBC.