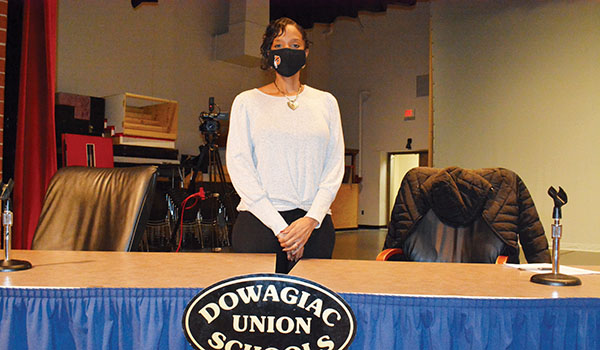 Woman of color to lead DUS board

CORRECTION: A previous version of this article stated Sullivan was the first woman of color to serve as president of the board. This information was not accurate, as Jean Smith previously served as Dowagiac School Board president in the 1990s. We regret the error and are happy to correct it.

DOWAGIAC — Upon returning home from a recent Dowagiac Union Schools Board of Education meeting, board member Ronda Sullivan’s phone rang. On the other end of the line was her 5-year-old niece, JeNora, a student at Patrick Hamilton Elementary.

While it is not unusual for Sullivan to hear from her niece, this phone call was one she would not soon forget, and the memory still plays vividly in her mind.

“She watched the board meetings one night,” Sullivan recalled. “I got home, and she called me and she said ‘TT, you looked just like Kamala Harris.’”

On Monday, Sullivan also made history — albeit on smaller scale — when she was unanimously chosen to be the next board president for Dowagiac Union Schools. She is one of a select handful of women to hold the position, and now hopes to lead the board with diversity and inclusion as some of her most important goals.

“That touched me,” she said. “Representation is huge, and I felt like at that time she saw herself and as I hoped that many in our community that were able to watch did, too. That made me feel proud that [JeNora] could look up here and see that someone looks like her and that she can say, ‘I can do that. Someone looks like me that is representing me and could have a voice for me,’ so I think it’s huge.”

Ronda Sullivan was elected the president of the Dowagiac Union Schools Board of Education during an organizational meeting Monday evening. Sullivan follows former board president Larry Schmidt, who chose not to run for reelection in November 2020. Before stepping down, Schmidt had served as board president since 2015.

Sullivan’s nomination was approved unanimously by all present board members, with trustee Ron Jones absent.

Following was the appointment of the board vice president. Initially, both Ruth Ausra and Terry Groth put their names in for the position. When the board voted, neither candidate secured the majority of votes, leading a recess of the meeting to determine next steps. When the board returned to session, Groth withdrew his nomination, and Ausra was elected vice president.

Later in the meeting, Groth was elected board secretary.

Born and raised in Dowagiac, Sullivan has been heavily involved in community and district activities. A former Parent Teacher Organization president in the district, she is entering her 10th year on the board and is a former vice president. Her twin sister, Danielle Lucas, is a financial aid systems analyst at Southwestern Michigan College and serves on the Dowagiac City Council.

“I was always a volunteer,” Sullivan said. “When they were in school, both of my children were very active, whether it was in clubs or sports. The community is where my heart is at and whatever I can do to serve and if that means continuing to be on the board and act as a president, I will continue to do my best to provide whatever I can and help in any ways that I can.”

Sullivan believes that diversity is one of the best aspects of Dowagiac. According to the Michigan Department of Education’s 2018-19 racial census report by districts, 40.3 percent of students in the district were non-white. Tracey Hatcher, who was appointed to the board in August, is a vocal leader in the community and brought a different perspective to the board as a black male.

“I think that we have to continue to put black and brown people in positions where all kids can see them,” she said. “We have a very diverse board, and that’s what excites me. Mr. Hatcher came on, and I think that there’s a lot of things that he can bring to the board, especially with our young black males and the community that he can speak for.”

Sullivan enters her stint as president amid the ongoing COVID-19 pandemic. She aims to help lead the district through the challenges it faces during this time.

“I try to listen and take everyone’s input into consideration,” she said. “You have to put your own opinion aside sometimes, and you have to make the overall best decision for everyone,  and that’s hard. With everything going on, emotions are high. I hope we can continue to try to find common ground for everyone. How do we compromise without losing our ethics? How do we compromise and figure out what’s good for everyone so we can reach a common goal? That’s what we’re trying to do.

“I would love to reach out to our district staff, and you know just make sure that they understand and know that they’re supported,” she continued. “At the end of the day, our goal is to make sure our children are taken care of and that we are supporting our children and setting them up for success.”