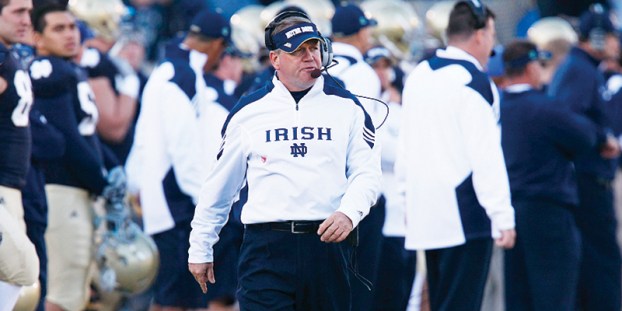 Brian Kelly and the Notre Dame football team have been cited by the NCAA for recruiting violations. (Leader file photo)

Notre Dame, a former assistant coach and the NCAA enforcement staff agreed that the former coach had impermissible contact with a prospect when he met privately with the contact at his high school before July 1 after the completion of his junior year, the NCAA said in its report.

The former assistant coach also had exchanged impermissible text messages with another prospect on 10 occasions.

Notre Dame and the NCAA used its negotiated resolution process, which is used instead of a formal hearing or summary disposition because the university, the involved coaches and the enforcement staff agreed on the violations and the penalties. The Division I Committee on Infractions reviewed the case and whether or not the agreed-upon penalties were reasonable, which it did.

Here is the list of penalties that were approved by the committee:

While Notre Dame Athletic Director Jack Swarbrick felt the penalties were harsher than the violations, he said the school would abide by the NCAA’s ruling.

“Any violation of NCA rules is unacceptable, and Notre Dame takes full responsibility for its actions in this regard,” he said. “While we made clear to the NCAA our view that the agreed-upon penalties exceeded the nature of the infractions, we accept the final outcome of the case. In addition, the assistant coach involved is no longer employed by the university.”