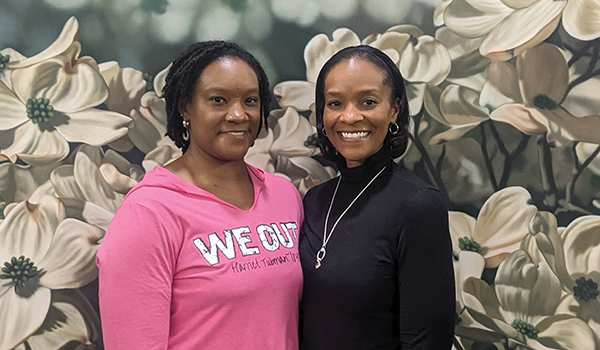 DOWAGIAC — The saying “being a twin is like being born with a best friend,” is one that twins Ronda Sullivan and Danielle Lucas could not agree more with.

Ever since they could remember, the duo has been near inseparable. Even now as adults, their families live right next door to each other.

“I have no idea what type of person I would be if I did not have her as my best friend,” Lucas said. “Because we’re always involved with each other, some people think my daughter is her daughter, and some people think her sons are my sons. That’s how it’s always been.”

“When we were younger, we used to watch shows where twins would bicker with each other,” Sullivan said.
“We never could understand how that happened if you’re a twin because we’re so close.”

Lucas is a financial aid systems analyst at Southwestern Michigan College and has been a member of the Dowagiac City Council since 2015, while Sullivan supervises eight area McDonald’s locations for JNKO Management Inc. and was recently chosen as Dowagiac Union Schools’ Board of Education president after years of serving on the board.

With the support of their families as well as each other, the Dowagiac natives have become two of the city’s most prominent members.

“Ronda has always been a leader,” Lucas said. “She has always been a take charge kind of person. That’s just part of her character. I think that I’ve actually been the quiet one, so I looked to her to be our voice sometimes because she’s more articulate, and she, you know, she’s more outgoing. She inspires me to be the same. I appreciate that quality in her, it has just always been that way and so she kind of dragged me along getting encouraged me every step of the way, so I appreciate her. She’s my best friend.”

In Sullivan’s eyes, it is Lucas who plays the role of a big sister figure in her life who has always been there to offer support and sound advice.

“My mom always said that she was the mother between us two,” she said. “I think I can always count on her to be my honest soundboard. I know that I can tell her to be honest and tell me the truth, and there’s things that I bring to her where I’ll say, ‘I said this, how did that sound’ or ‘was that appropriate.’ She is definitely the mother hen of me and makes sure that I stay even-keeled. She’s that person that will always be honest and upfront with me and takes care of me to this day.”

According to Lucas and Sullivan, their parents and grandmother set the standard for them to follow.

“They have endured a lot throughout their lives,” Lucas said. “My grandmother raised 12 children, and my mom was the oldest of the 12 and never finished high school. Watching them throughout the years working through life, I was inspired to continue on with my education, to be kind to everyone in the community, to do volunteer work to help others. I get that from [my mom]. She’s a very very kind-hearted person. She saw the good in everyone and I think that’s why I just love being around people, and why I love people and want to help others.”

According to Sullivan, their father instilled in them a work ethic that influences them to this day.

“We always worked with my dad growing up,” she said. “I don’t think there was ever a time when my dad didn’t have at least three jobs and we always would go with him to a lot of his side jobs, so the work ethic was put into us very early on. I remember when I was 16, and I was filling out an application, and he said ‘if you’re going to go apply make sure that’s what you want to do and don’t go waste those people’s time. That stuck with me. It was to take it seriously and have a neutral respect for the employer and also to build that work ethic.”

Growing up, Lucas and Sullivan were always involved in community activities including church and school events and volunteered for organizations such as Relay for Life. For them, pursuing positions on the school board and city council was a natural step and allowed them to be the change they wanted to see in the community.

“It takes a community to get things done,” Lucas said. “I think it’s just very important that we are involved and I just love being involved in things, sharing ideas, knowing what other people are thinking and just knowing that being on the city council, I know that we are planning for the future. We’re trying to do positive things that will impact a lot of people. Just being involved in that is a great opportunity for me and I’m grateful that I’m part of the city council.”

“For me, it was the concept of not complaining about things that you’re not willing to give in and try to make a change. It was more of everything that my sister said and making sure that if you have a voice making sure that you participate. Don’t be on the sideline and complain, get involved and participate.”

Representation is especially important to Lucas and Sullivan. As black women in positions of power in historically white spaces, they hope to serve as sources of inspiration for the community’s black youth.

“I wanted to make sure that my children saw that I was involved,” Sullivan said. “I want my niece to see us in a position where she can know that she can do different things and that she sees herself in any institute and any avenue.”

“I believe that we need a seat at each table,” Lucas said. “I just think to have a voice, to let people know that we are interested in your daily lives, the city, the school and different activities. I think that as a minority person, we’re not seen in many different aspects, and it’s very important for us to let our young kids know that we have a voice. We need to let people know what our ideas are and give our input. It’s very important for these young kids to see that, just because we’re in a small community, it doesn’t mean that we can’t be involved or be a part of different organizations or clubs.”

For the twins, Dowagiac is home. With generations of family embedded in the community, the sisters aim to make Dowagiac a place where their family can keep its roots in.

“Family is important to us and has kept us here generation after generation,” Lucas said. “We have a lot of cousins here in the city, and I think this city is a very good place to raise children. We have a very good school system, and there are things to do in and around here. I just think it’s a beautiful corner of Michigan, so I love it.”