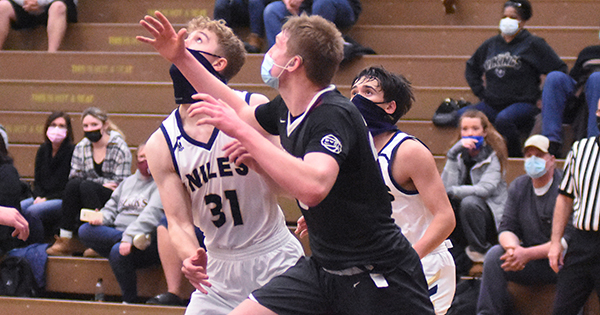 Niles puts it all together to snap 21-game losing streak

NILES — The waiting is over.

For the first two weeks of the high school basketball season, the Niles boys team has been waiting for everything to come together. The Vikings came close to winning through the first five games of the 2020-21 season, but could not quite finish the job.

Against visiting Buchanan Friday night, Niles put a complete game together as it got off to a quick start, maintain control of the game throughout, and held off a Buchanan rally in the final minutes of its 49-46 BCS Red Division victory.

The win snapped a 21-game losing streak for the Vikings, which dates back to pre-COVID times. The last Niles win came on Jan. 7, 2020, when it defeated New Buffalo.

“I am just so happy for our boys,” said second-year Niles Coach Patrick Touhey. “As you know, it has been a long time. We have had competitive contests, and we have had contests that were close enough that we could get a win. But we were never able to close the deal.”

Snapping the losing streak in itself was a big deal, but to get it against a rival school like Buchanan, which is one of the top Class B programs in southwest Michigan, was even bigger as far as confidence is concerned.

“Buchanan is a very good team that has a very large presence in the middle,” Touhey said about 6-foot-7 senior Logan Carson. “That is a difficult matchup for us because of our size. So, for our kids to continue to fight and execute what we asked them to do to neutralize Carson all the way to the end, I am just very happy for our boys.”

The Vikings would hold Carson to 15 points and only allowed one other Buchanan player to reach double figures. Niles (1-5, 1-2 Red Division) was able to do that with their quickness and athletic ability.

“We wanted to spread them out and create opportunities by attacking space,” Touhey said. “But, importantly, when we attack, pull up and shoot the 10-footer or 8-footer or kick it out. Austin Bradley came up big for us. That is a big thing for him because that builds confidence.”

Bradley would finish with nine points, all on 3-pointers. The Vikings were able to spread the offense around as Adrian Thomas scores 14 points, George Pullen scored 12, while Mike Gilcrese added eight.”

Touhey said that a buik of the credit goes to the effort his team put in to stop the Bucks at the court’s offensive end.

“Two things help us accomplish what we wanted tonight,” he said. “Our defense was awesome tonight. Our rotations, our ability to rotate down and create traffic in the paint, never let him [Carson] become comfortable. The international student [Murray Allan] from Scotland did an unbelievable job of hounding him. He has such strength, Carson wasn’t able to move him or do what he wanted with him. So, Murray’s contribution tonight was big.”

“I think it was the first quarter,” he said about the difference in the outcome. “We didn’t match their intensity. I don’t think my kids showed up ready to play. We have to learn how to do that because, every night across the country, teams that don’t show up ready to play get beat.”

Buchanan will play the remainder of the season without its leading scorer Ryan Young, who suffered a broken ankle. Young was averaging 16.5 points per game after the Bucks’ first two contests.

The visiting Wildcats defeated the Vikings 48-34. No further results are available. Niles will host Lakeshore in another non-conference game set to tipoff at 7:15 p.m. on Monday.

The Bucks are back in action on Tuesday when they travel to Bridgman for a BCS non-divisional contest. The game is scheduled to begin at 7:15 p.m.