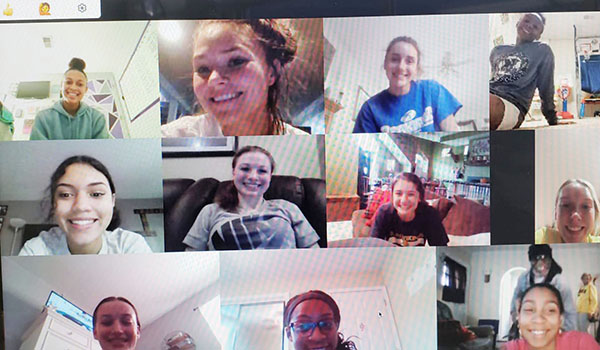 Since the Michigan High School Athletic Association decided to have fall and winter sports, area coaches and athletic directors have had to find ways to keep their athletes engaged.

Thanks to the COVID-19 pandemic, which suspended and eventually ended the 2019-20 winter sports season and all of the 2020 spring sports year, athletes were kept out of gymnasiums, weight rooms and face-to-face practices until late August.

It was not until the MHSAA began allowing outdoor practices with social distancing and other guidelines that athletes and their coaches were allowed to gather and begin preparing for their upcoming seasons.

In between, coaches began hosting Zoom meetings and taking to social media sites to connect with their teams. They could see each other, talk over what they needed to be doing and build team unity.

Even athletic directors got involved, posting online daily workouts that would allow athletes to stay in the best shape they could without access to weight rooms.

The state was able to get most of the fall sports season completed before it once again had to suspend the state tournament in football, volleyball and girls swimming and diving in late November.

The MHSAA would restart the fall sports season in January and be able to complete them.

Meanwhile, sports were suspended on Nov. 15, 2020. Winter sports practices were scheduled to begin, but those practices were also put on hold until January.

Jessica Johnson, the Niles girls basketball coach, set up a Google Classroom to keep her team together and mentally prepared for when they could return to practicing indoors and start their season.

“We put in workouts every day,” she said. “It is not even necessarily related to basketball. Monday was upper body. Yesterday was lower body, and today I think it was a full-body workout. I left it flexible so that they can do it on their own.”

The team then gathers on Google to report how they did with the workouts and anything they wanted to share about the workouts.

“We also have scheduled times so that we can do a quick check-in and do team workouts as well,” Johnson said. “My biggest thing is that the girls staying connected with each other. We are taking things day-by-day and staying positive. We want to make sure they have somewhere or someone to check in with because it can be a difficult time, especially at home now that we are doing remote learning.”

Not everything is about basketball. Johnson has also set up lessons for her players.

“We will do leadership activities and team building,” she said. “[We set] goals for homework and discuss what they are thankful for. I just continue to add things on there as the girls suggest things.”

The goal of these meetings is to keep the players not only physically prepared, but mentally.

“There is a mental aspect to being active and having a routine,” she said. “I want to make sure I am doing that for the girls — normalizing things as much as possible at this time, which is tough to do. It is about trying to keep some normalcy in their lives at this time.”

Originally, Johnson was going to have her team go over plays during the break, but changed her mind.

“I had given all the girls a playbook on the last day of school when we met in person,” she said. “My goal was to start going over some of the plays and the execution of the plays in that Google Classroom. However, since the MHSAA said we would come back on the [Dec.] 9 and we would not be in competition until January, I felt that it would give me time to implement that.”

Since the state extended the stay-home orders, Johnson had to rethink that and began going over plays in those meetings.

Dowagiac Athletic Director Brent Nate took the initiative in spring 2020 to begin sending out daily workouts via Twitter. The Chieftain at home workout of the day consists of several exercises aimed at a particular sport and one that will keep everyone ready for their upcoming seasons.

“I was talking with our high school coaches, and Mike Stanger and I, who kind of run the powerlifting club, said let’s put a work out together since all the weight rooms were shut,” he said. “Its focus is on just core body lifts to keep certain level of strength, mobility, something to keep them active on a daily basis.”

Nate said, like any exercise, his athletes need to be self-motivated.

“So, we put it out, and I have gotten tons of positive feedback from our student-athletes, coaches and people in the community,” Nate said. “It is for anybody to do. It is a bodyweight workout. You can put your backpack on with all your books in it to add weight.”

In order to keep it fresh, Nate has done several things like using the letters in an athlete’s name to tell them what their workout would be for that day.

“Through personal experience, through athletes who have gone to college or just researching it, you find ways to keep workouts exciting,” he said. “It is tough. Especially at-home workouts. It is not easy to do. If you are bored doing it, just like anything else, you are not going to do it.”

Nate emphasized that the workouts were not designed to create bodybuilders, but to keep the athletes ready for when they could finally return to the court, the field or the mat.