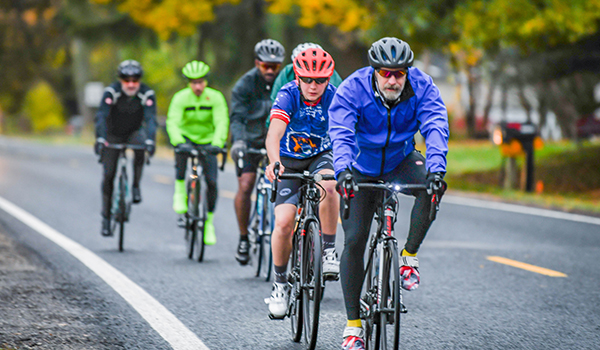 Cyclists from throughout Michiana create a biking community in Buchanan

Gathering in the gravel parking lot of River Saint Joe Brewery on June 16, there was an excitement in the air as people saw others after months of government mandated COVID-19 shutdowns.

As bicycles were taken down off of vehicle bike racks, out of car trunks and truck beds, cyclists greeted one another. The staccato clip of cycling shoes clicking into place in the pedals throughout the greetings as riders tested their bikes on the terrain.

The first ride in June for Bike Buchanan saw a large turnout of more than 60 riders. During peak points of the spring, summer and early fall, 70 to 80 people joined the rides. By the end of the riding season, on Oct. 27, only about 20 riders came out. The days were getting shorter and this specific day had been rainy, but the cyclists who arrived were in high spirits, happy to close out the season together.

At the last gathering, founder and Smiles for Miles ride leader Liz Martin stood on the rock barrier on the sidewalk at the brewery. She announced the four group rides to take place on their last night, and urged the bicyclists to get moving.

“I want to thank everybody for coming out tonight,” Martin bellowed from her perch.

Rounding out its third season, Bike Buchanan has grown from just one all skill level inclusive ride around Buchanan three years ago, to up to six groups to divide into with different speeds and distances on Tuesday evenings. The rides have attracted everyone from new bicyclists to Olympic-level athletes.

Martin has met cyclists from all around the area, including Goshen, Elkhart, South Bend, Mishawaka, Niles, Benton Harbor, St. Joseph, Stevensville and beyond as they have participated in a Bike Buchanan ride at one point or another.

Martin’s vision was to create a space for everyone to enjoy riding their bike, no matter what type they had access to. When she was just getting started with her cycling, Martin noticed that the sport had an intimidating edge.

“A lot of those riders have become my friends, but I always felt like I didn’t know where I fit in,” Martin said. “I wasn’t super fast. I didn’t have all the gear. You immediately start your self-doubt, and you think you can’t go as fast as those people. Obviously, you can as you keep riding, but I noticed there was a desire for people who wanted to go out and cruise around and meet people.”

As the ride grew over the next few years, Martin recruited friends to help scout ride routes and lead rides with her. Martin has retained leadership of the “Smiles for Miles” ride, the all-level rider group. Nearly all the rides, save for one for more competitive cyclists, are “no-drop” rides. “No-drop” means that no bicycle rider is left behind. The leader will hold the group at stop signs and slow the pace down if the group is starting to come apart. Another part of being the group leader is calling out obstacles, so the rest of the group may be aware of a pot hole or dangerous divot in the road.

With the exploding popularity of the group and its partnership with River Saint Joe, Martin recruited Allison Butcher, of Buchanan, and Genevieve Shaba, of St. Joseph, to help lead rides in 2020. Neither Butcher nor Shaba would describe themselves as being hardcore cyclists prior to becoming ride leaders with Bike Buchanan.

“After college, I moved back to Buchanan and I needed something else to do,” Butcher said. “Liz was always encouraging me to ride with her. She was always describing how therapeutic it was.”

Butcher grew up with Martin, becoming best friends in kindergarten. Butcher had borrowed a bicycle from another Bike Buchanan participant, and finally, a week before the last ride of 2020, bought her own bicycle to finish out the year.

“[Martin] was keeping me accountable,” Butcher said. “She knew I liked it. It was just getting me to go after work. It was due to her accountability that I kept coming back. I got addicted, and now I’m here every week.”

Athletics has been a part of Shaba’s life even through college occer. She wanted to take a different approach to staying active in her free time.

“I’ve been biking off and on for a while,” Shaba said. “I met Liz through a mutual friend at work. She, along with the entire biking community, have been extremely welcoming. I’ve met so many people, and it’s really opened a lot of doors.”

Shaba moved to St. Joseph after graduating from college, and visiting Buchanan showed her a second community to explore.

“I didn’t know what was around here,” Shaba said. “It’s a smaller town than I’m used to. It’s been really cool to have people come around and do something active together.”

Behind the bar at River Saint Joe during the last ride of 2020, Chelsea Schmeling, Heidi Haney and Austin Work were working the evening of the last ride for Bike Buchanan. The three recognized the riders who were there, and had a comfortable banter with many of them as the riders placed orders and returned for fresh beers.

The brewery would open exclusively for the group rides on Tuesday evenings, a day the brewery is otherwise closed.

“We try to do some special eats for the group,” Haney said.

Both Schmeling and Work said the group that gathers at the brewery after the rides has been very supportive.

The partnership has been beneficial for both River Saint Joe and Bike Buchanan.

Flatwater Farms and River Saint Joe co-owner owner Fran Tuite has been a cyclist and bike commuter in Chicago. She learned about Martin’s group, Bike Buchanan, and intended on reaching out to her to form a partnership. Tuite said Martin beat her to it.

“The owners had heard of [Bike Buchanan], and I went in with the idea of pitching us supporting River Saint Joe,” Martin said. “They were super receptive, and it was an awesome partnership from the get go.”

Tuite was thrilled with the partnership.

“It was kind of serendipitous,” Tuite said. “I love supporting biking and getting people outside.”

Hosting Bike Buchanan on Tuesday evenings opened River Saint Joe up to more cycling groups, as cyclists and people getting into riding their bikes journeyed to the brewery for the all level rides.

“I think the community and locals loved the idea,” Tuite said. “I definitely think it introduced our place to people who wouldn’t have known about us. Bike Buchanan drew people from as far away as Holland, Michigan, a bunch of bikers from Whirlpool in St. Joe and Stevensville. There’s a brewery, Watermark. They have a cycling team, and they made it a point to also do some rides to us on Saturday. There’s a Pachyderm group that found out about us. Local community members who maybe weren’t beer drinkers heard about us.”

Tuite said the brewery did not track how many cyclists and community members found out about them through Bike Buchanan, but she knows it was considerably more people than had they not fostered the partnership they did.

Having the space to stage the rides, come back to and store bicycles and gear, and be able to enjoy beer and snacks together was a game changer for Martin and the ride.

“It added to the social aspect,” she said. “We were able to enjoy their beer garden and their outside areas. As it was getting colder, they have beautiful fire pits and Adirondack chairs. There’s more than enough space for us to be together, but keep a safe distance, and I think that makes it super unique and important.”

Striking the social balance along with the recreational was important to Martin.

For Teresa Sheppard, of Niles, and William Hoffman, of South Bend, the draw was a friendly ride with others who were looking to build an inclusive cycling community.

“Beer helps,” Hoffman said, jokingly, as he raised his glass after the ride.

With the sun set, the cyclists finished their beers and thanked the brewery staff as they left, speaking of future rides and looking forward to the beginning of next year’s adventure.