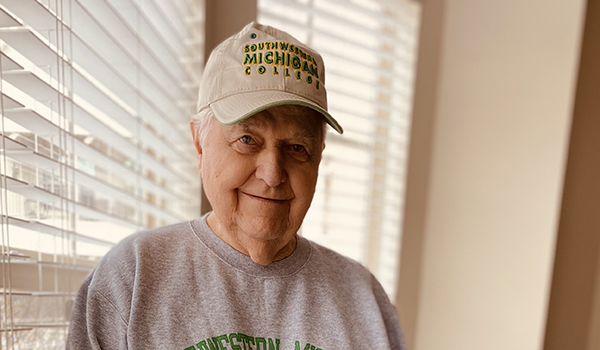 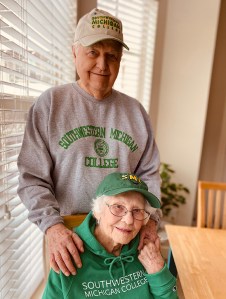 “We’ve been loyal to SMC since it was only a name on a piece of paper,” he said of a photo his daughter took of them resplendent in Roadrunner gear.

Recently, college officials caught up with Ivey to reflect on his career.

SMC was Ivey’s second of four presidencies and one of two colleges he helped “start from scratch.” They have returned to Dowagiac many times, including for Nathan to be Commencement speaker 10 years ago for the Class of 2011 and for the college’s 50th anniversary in 2014.

“Yes, I have good memories of the 2011 Commencement address and also the 50th anniversary celebration,” he said.

His graduation speech compared SMC rising out of cornfields to the 1989 film, “Field of Dreams.” Kevin Costner’s character, Iowa farmer Ray Kinsella, has a vision, “If you build it, they will come,” for a diamond where baseball immortals would play.

Ivey compared Kinsella to Cass County citizens who endorsed the vision of a citizens advisory committee and “voted to tax themselves to build a community college. At the same time, they elected a Board of Trustees and authorized it to create the college” in 1964.

The Iveys arrived in Dowagiac in 1965 to an unnamed college without a campus, an office, a telephone number or even a pencil. The Board of Trustees secured office space at what was then Community State Bank and things began to happen.

Ivey was 37, Dr. Fred L. Mathews, chairman of the Board of Trustees, was 36. Ivey had 12 years as a community college administrator behind him and a doctorate in higher education administration from Michigan State University.

The Iveys settled into the community and SMC began to take shape on Cherry Grove Road. “Selecting the property, working on the site and planning the first buildings were challenging and enjoyable projects,” Nathan recalled. “And we loved living in Cass County. The residents of Dowagiac were welcoming and gracious to our family.”

During 30 years in public schools, Dorothy taught a combination of Latin, English, history and journalism. She sponsored a high school newspaper for more than 20 years. She finished her master’s degree from Western State University of Colorado, Gunnison, while living in Dowagiac.

“I think I did some of my best teaching when we lived in Dowagiac,” she said. “I always loved teaching writing in English classes. I remember [longtime City Councilman] Wayne Comstock wrote a beautiful descriptive essay of a sailboat on Indian Lake. It was a joy to teach some wonderful young people at Central Junior High. They filled our house on Orchard Street, studied around our dining table in the evenings, shoveled our snow, made pizza and cleaned my kitchen.”

His first presidency had been with Colorado Northwestern Community College in Rangely and Craig.

Nathan left SMC in 1968 to build a second community college in southern Illinois that became John A. Logan College at Carterville.

Following a five-year tenure, Ivey moved to the Chicago area to develop a new campus for an old school. Thornton Community College was renamed South Suburban College in South Holland.

In 1984, Nathan retired to Texas, but in a few months, he joined the sprawling seven-campus Dallas County Community College system and kept planning buildings. He closed out his career at 86 after seven years as community college liaison to the University of Texas, Dallas.

Nathan and Dorothy are native Texans who met as undergrads at Hardin-Simmons University in Abilene.

The Iveys live in a senior independent residence in Dallas. His daughter, Sara, lives nearby with husband Dr. Xin Min Zhang, a retired college math professor.

Sara had a long career as a medical journalist. Her two sons by a previous marriage live in the Dallas area. Son Nathan Piller is a business marketing executive. His wife Morgan is an architect. Son Martin Piller and wife Gerina are professional golfers. They have the Iveys’ only great-grandchild, A J Piller, 3.

Oldest daughter Judith Ivey has enjoyed a long career performing in movies, TV and on stage. She is semi-retired and lives in New York City with husband Tim Braine, a former TV producer and HBO executive. Their daughter, Maggie, and husband, Zach Ellis, live in New York City. They are both Vanderbilt University graduates. Their son Tom Braine is nearing completion of a Ph.D. in physics from the University of Washington, Seattle.

“We have been blessed with good health and many wonderful experiences,” Nathan said. “We’ve made good friends wherever we have lived and we hope we contributed to the communities where we have been privileged to serve.”