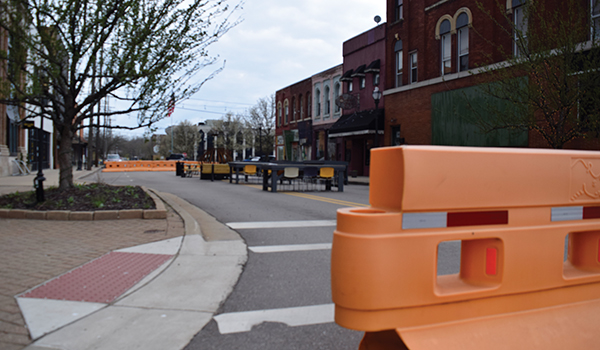 CLARIFICATION: In an earlier publication of this piece, Lisa Croteau was misquoted regarding the caulk connection and bollard for The NODE’s improvements. The Niles Daily Star regrets the error and is happy to clarify it.

The Niles DDA discussed its options moving forward with The NODE during its meeting on Wednesday morning. The DDA approved a motion, with Chair Bryan Williams and board member Wendy Halder abstaining, to take over expenses of running The NODE from the city.

The DDA voted to use $2,500 from its general fund to make immediate improvements to The NODE, and will request that the city provide 120 service hours throughout the year on maintenance issues, such as utility maintenance. The DDA will seek to have the city bury The NODE’s gas line as well.

Throughout the course of the meeting, business owners, DDA members and potential members discussed concerns about The NODE’s safety, as well as brought forth potential solutions in to elevate its execution.

During the meeting, Lisa Croteau, director of marketing and administration for the Niles DDA, said two potential paths to fund the improvements had come forward.

“The city has been able to get some COVID-19 [relief] money, and we are trying to figure out what it can be used for,” Croteau said. “[City Administrator Ric Huff] will ask about streetscapes and walling in The NODE.”

Croteau said the funding did not appear until a few weeks ago.

“It’s a council decision as to how that money is spent,” she said.

Another option was brought to the table by Daniel Ashley, owner of UltraCamp, 123 E. Main St., which sets west of The NODE. He proposed leasing The NODE from the city, bringing in architects to design the space and leasing it back to the DDA at a reduced cost.

“I think a lot of this is really ambiguous at this point,” Ashley said, as many of the ideas are conceptual. “I’ve been trying to do this kind of stepping into the gap that exists [around The NODE]. There are a lot of lines that have been drawn where people are on both sides of The NODE. My fear is that everybody’s kind of entrenched and not looking at how to solve this challenge and come up with something beneficial for everybody involved. That’s really what I’ve been working toward.”

The NODE has been topic of controversy for the community. The installation won recognition from MLive, a statewide news outlet, as “Michigan’s Best Outdoor Dining in Kalamazoo and SW Michigan” in February. Arthur Havlicek, president and chief executive officer of the Southwest Michigan Regional Chamber, has also spoken positively of the impact of The NODE for local businesses.
However, 28 business representatives signed a petition that was presented to the Niles City Council in support of relocating The NODE from its current location.

Ashley would like to see solutions to an installation surrounding businesses have strong feelings about.

“I don’t think we’ve brought any actual experts to the process so far. It’s been everyone’s opinions about what they think is done right,” Ashley said. “The benefits and negatives associated with The NODE are almost all anecdotal.”

Ashley said he has had some initial meetings with architects who specialize in urban planning.

“As far as specific plans as to what The NODE would look like or features it would have, I think anything in that direction is really, really early,” he said. “I think one of the challenges is that there hasn’t been very much community input on The NODE, and understandably so. The reason it came into existence was a bit of a crisis mitigation. People were trying to act quickly. I feel we’re beyond that point now.”

Ashley believes his proposed leasing process would remove some of the red tape from the city’s processes and allow things to move more quickly in the way of improvement.

One of the architects Ashley has spoken to is a professor who runs a camp for school-aged students interested in the field. One idea is to get younger minds involved in the planning process for The NODE, as well as college students.

The two options — using COVID-19 funding to improve The NODE and exploring options with Ashley — were not put to a vote with the Niles DDA.

During the meeting, questions were raised relating to the safety of The NODE by board applicants of the Niles DDA, Melanie Kennedy, owner of The Grand LV, 104 N. Third St., and Stephanie Reno, owner of SLR Pilates and co-owner of Trap House 24 SLR, both on E. Main Street in downtown. Both inquired about stronger barriers to be put in place than the orange jersey barriers currently blocking the street from traffic.

“That’s something we should consider when you’re inviting families and children to hang out in the street with oncoming traffic in both directions,” Kennedy said. “The small, orange barriers wouldn’t really do much in the way of that.”

Williams said the barriers were full of “hundreds of gallons” of water.

Keeping the gas line up to code was a particular concern of Reno’s.

“Talking to our city inspector, after he went through and checked the multiple violations, he said it should have been up to code in order to have anybody there,” Reno said.

Williams acknowledged there had been two issues needing to be fixed with the gas line to the firepit, including caulking to be done around the gas line connection and a concrete bollard next to its meter.

Croteau said she thought the caulk on the connection had been completed, and the bollard was on order.