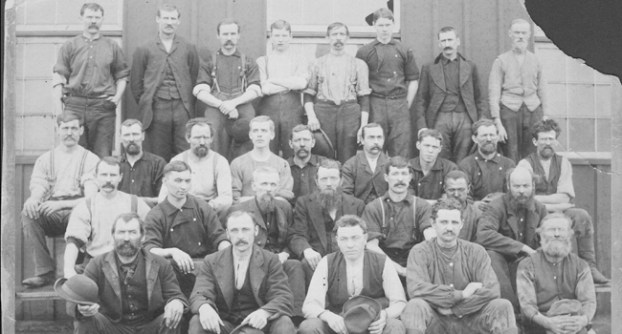 P.D. Beckwith and part of the Round Oak Stove Company crew from the 1880s. (Submitted photo)

DOWAGIAC — For more than 150 years, the state of Michigan has been known for its manufacturing prowess.

The city of Detroit is known as the birthplace of the modern automobile and Grand Rapids, Michigan was once known as “Furniture City” because of its production of fine wood furniture. Much like those cities, Dowagiac was once at the forefront of its own manufacturing niche — the furnace industry — and the Round Oak Stove Company led the charge.

The company was founded by entrepreneur Philo D. Beckwith in 1871. While the true origin of the name is unknown, two theories persist. The first being that Beckwith’s stoves could hold a section of whole round oak tree in their round firepots. There was also a foundry in England with the name Round Oak, which could have inspired Beckwith as well.

Beckwith made his first stove in 1865 and even produced stoves for 300 Michigan Central Railroad Stations between Chicago and Detroit in 1867. He also created a two-horse grain drill, for which the state of Michigan awarded Beckwith a silver medallion in 1869.

Round Oak was the first manufacturer in Dowagiac when Beckwith and his original team of eight employees began producing stoves and furnaces. According to Dowagiac Area History Museum director Steve Arseneau, the Round Oak stove was a solidly built, durable heater with attractive castings and some decoration, which was priced to be affordable to most Americans.

The company made stoves of all shapes and sizes. Arseneau said the company even made parts for a small firm out of Benton Harbor called FATSCO, which made small 12 to 18-inch stoves for ice
fishing huts.

Known for its quality and durability, the name Round Oak soon became synonymous with heating stoves. Advertising from the 1890s claimed that more than 1 million stoves were in use at that time.

By 1915, the company employed more than 1,200 people as the families flocked to Dowagiac seeking employment from the growing company. Round Oak’s success inspired several new stove manufacturers in the area, including Rudy Furnace in 1915, Premier Furnace in 1920, Dowagiac Steel Furnace in 1929 and later Dowagiac Manufacturing.

“It cannot be overstated how important Round Oak was to the development of Dowagiac,” Arseneau said. “A comparison of Round Oak employment figures with the city’s population from 1870 to the 1920s shows that the population growth correlated directly to the company’s growth. Round Oak brought the Industrial Revolution to Dowagiac and made the city a manufacturing town for over 130 years, including 60 years after Round Oak closed.”

The passing of both Beckwith’s cousin O.G. Beach — a prominent salesman for the company — and Beckwith’s son Arthur — a key product developer — in 1914 is considered the beginning of the end of Round Oak’s dominance.

Like many businesses at the time, the Great Depression negatively impacted sales, which started trending downward in the early 1920s. World War II briefly revived Round Oak, as the company transitioned to making airplane parts and landing strips for the war effort.

After several decades of running on fumes, the factory was sold to the Kaiser-Frazer Corporation in 1947, and its name and assets to Peerless Corporation of Indiana.

Charles Mosher and Jack Barrow brought the company back in 1948 but were unable to generate enough profit with its new heating and cooling products. The 1950s marked the end of Round Oak’s time in the furnace industry.

The Round Oak Stove Company may be gone, but its impact is still felt more than 60 years later. According to Arseneau, Round Oak impacted the social scene with the Round Oak Band, Round Oak Baseball team and the Beckwith Memorial Theater. The philanthropic activities of the Beckwith and Lee families included the city’s first library and hospital.

“The industrial heritage it created in Dowagiac continues with companies such as Lyons Industries and Creative Foam,” Arseneau said. “The Round Oak foundry built in the 1910s is still used by Ameriwood Furniture, the hospital originally founded by Fred Lee and expanded significantly over the years is still in operation. The philanthropic legacy of the families continues through the city’s residents supporting many nonprofits, and I like to think that the Beckwith and Lee families’ love of the arts rubbed off on the citizenry and that continues today.”