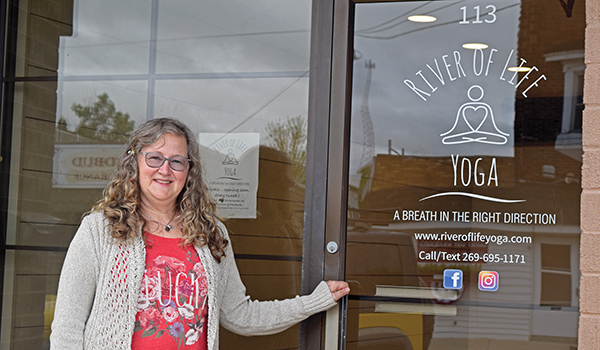 BUCHANAN – A building getting a new lease on life in downtown Buchanan will soon be what the instructor and owner of River of Life Yoga affectionately calls “the yoga joint.”

The nickname will be a cheeky nod to the several businesses on Buchanan’s Front Street.

Ulrike McCarty, of Buchanan, is almost done with the renovations taking place at 113 Main St. in Buchanan, transforming the space into a yoga studio to host group classes, private sessions, workshops and potentially bodywork and energy services. She hopes to have the doors open and classes started in June.

“I’m looking forward to offering private sessions,” McCarty said. “It just helps you to begin with yoga, or if you have a certain restriction, and you are trying to figure out how to work through that, or use props, you can learn for when you attend a regular class. It will help you figure out how to work around that.”

McCarty is a registered yoga teacher. She has taught her classes at the Buchanan District Library, the Buchanan Common and virtually throughout the past year. Finding River of Life Yoga a home downtown was something important to her to host both private sessions and regular classes alike. She hopes the private sessions will help people new to the practice, or those working on getting to the next level with yoga, to work safely through poses.

As she walked through the studio space, nearly fully remodeled, McCarty described the function of each room at 113 Main St. From the flooring finishes, which include heat throughout the studio, to the adjustable lighting and dark ceilings, so the atmosphere can be adjusted, McCarty has mindfully chosen each part of the remodel.

One of McCarty’s favorite types of yoga to teach is restorative, where students spend most of the class time on the floor.

“You’re on your back, front or side, and you have props that you rest into. You don’t need any strength, you just have to be comfortable being on the floor,” McCarty said. “You only have to worry about getting down once and getting up once.”

The style of yoga she was taught, and now teaches, is a hatha-style yoga.

“It’s alignment based,” McCarty said. “I personally don’t teach ashtanga or vinyasa, which are more ‘flowy’ and faster-paced.”

In addition to restorative yoga, another type of class she will host is a yin yoga.

“That’s sort of between a more active yoga and the restorative,” McCarty said. “I like to have you experience the post, so you’re in the pose for a little bit longer.”

She has always led an active lifestyle.

Before McCarty came to yoga, she did strength training and ran races, including half marathons and a marathon.

“I had good strength, but I found some of the poses were difficult. I didn’t expect some of the emotional effects when we move through different poses in yoga,” McCarty said. “It can channel the energy, and when you don’t know that, or even when you do, it’s always a surprise. You feel really good, but it can be challenging.”

After a car accident in 2014 forced her to take a break from physical activities, she learned more about meditation. As she learned, and her body healed, she returned to yoga using props and adjustments to make it safe during her recovery.

After having a friend go through teacher training, she decided to sign up and become a yoga instructor, with no intention of actually teaching.

“I took my first yoga training just to further my own knowledge,” she said.

From there, she felt transformed and decided to open her own practice.

Now, as she readies the River of Life Yoga “joint,” she is excited to welcome students into a space she hopes will be a safe space, with no judgment.

“The name ‘River of Life’ came to me during my 300-hour training,” McCarty, who is now a 500-hour trained instructor, said.

She remembered  a book by Doug Keller, when she was working through pranayama, or breathing exercises. One of the chapters stood out to her.

“If you don’t breathe, that’s the end of your life cycle. He worded it in a way that [the breath] is the ‘river of life.’ It struck me,” McCarty said. “That’s how I feel. It all started with the breath.”