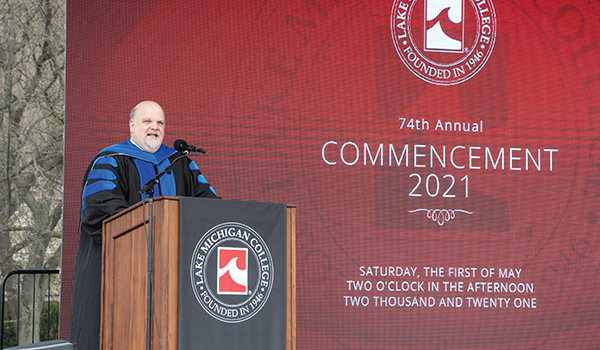 BENTON HARBOR — A White House proposal has community colleges around the country in a state
of excitement.

The Biden administration announced its American Families Plan last week, which the White House said calls for $109 billion to make two years of community college free for all students in addition to a roughly $85 billion investment in Pell Grants to decrease the reliance on student loans. Under the plan, roughly 5.5 million students would pay no tuition or fees.

It is a proposition that Lake Michigan College, 2755 E. Napier Ave., Benton Harbor, believes would be a boon to its student base. In addition to its main campus in Benton Township, the community college also has regional campuses in both Niles and South Haven.

“Lady Jill Biden has been a proponent of this,” said LMC president Dr. Trevor Kubatzke. “She actually worked on a national committee under Obama to try and drive home to more and more states, if not at the national level, that community colleges are free for all. It’s not surprising that this is on his plate for families. We believe the community college system is the best first two years of any bachelor’s degree and the best training site for the workforce.”

According to Kubatzke, getting that opportunity open to everyone not only helps communities, but states as a whole. He also noted that the endeavor goes along with Gov. Gretchen Whitmer’s “60 by 30” goal, which aims to increase the number of working-age adults with a skill certificate or college degree from 45 percent to 60 percent by 2030.

According to a February 2020 news release from the governor, Michigan ranks 33rd nationally for education attainment and is below average in the Great Lakes region.

“I’ve been supportive of these types of programs for years,” Kubatzke said. “I think it would really benefit southwest Michigan as a whole.”

LMC hosted its drive-in commencement ceremony for graduating students last week. The ceremony capped what has been a year like no other for the institution.

“The college took a very early stance that we didn’t want to keep our students out in limbo about last fall,” Kubatzke said. “A lot of schools were saying they were going to be in person, but we decided to make the decision to pivot to a multiple-option plan for the fall.”

Under the plan, LMC students had access to options including hybrid learning, face-to-face learning and full online learning.

“I think our students appreciated having stability,” Kubatzke said. “It wasn’t a situation where we went to campus and then the next day we’re off campus because of an outbreak.”

Before transitioning to remote learning for the spring semester, LMC took a two week break to make sure the faculty had the tools and skill sets necessary to continue the semester.

We feel that in the spring and fall, our students got really good experiences,” Kubatzke said. “Yes, they would have rather been in person, but even if they couldn’t be, they got a good education and good experiences.”

With one of its most challenging academic years in the books, LMC looks ahead to next year and aims to improve its education experience for students. In addition to offering more online options, the college plans to bring back face-to-face classes for those who want them.

“We believe that there are students who didn’t come last year because they either didn’t want to do remote or because they couldn’t because of lack of broadband,” he said. “If you’re working under a slow internet connection, these kinds of classes don’t always work. We’re excited this fall that we will have a much broader range of offerings for our students to make sure that we’re meeting them where they are and how they want to to learn.”