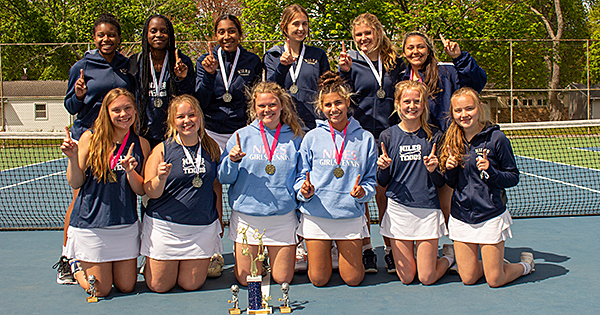 The Niles tennis team edged Paw Paw to win its own tournament on Saturday. It was the second tournament victory of the year for the Vikings. (Submitted photo)

NILES — For the second time this season, the Niles girls tennis team walked off the court carrying a first-place trophy.

This time, the Vikings edged Paw Paw 13-12 to capture its own doubles tournament on Saturday. Buchanan finished third with eight points, and Kalamazoo Central finished fourth with three points.

Finishing second for Niles were Meg Crites and Nicole Aufie, who are usually singles players, as they were 2-1 against Paw Paw, Buchanan and Kalamazoo Central. Nevaeh Williams and Anna Johnson were second at No. 4 doubles with a 2-1 record, while Zoe Gondeck and Anna Kennedy were third at No. 6 doubles. They also went 2-1 on the day.