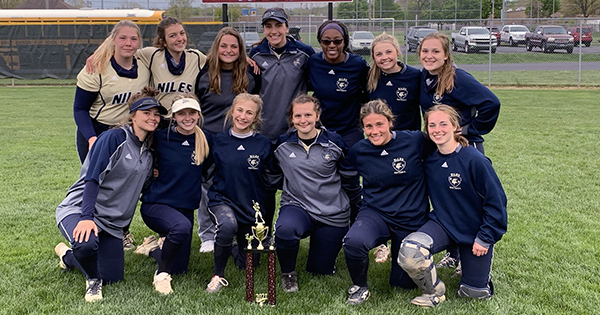 The Viking softball team won its second straight tournament at it captured the Caveman Classic on Saturday. (Submitted photo)

MISHAWAKA, Ind. — The Niles softball team picked up its second straight tournament championship as it captured the Mishawaka Caveman Classic by going 3-0 on Saturday.

Mya Syson was the winning pitcher in all three contests. She tossed a two-hitter against Mishawaka with 10 strikeouts and one walk. Against Western, Syson scattered four hits while striking out seven. She scattered six hits against Dwenger with six strikeouts and no walks.

Alexis Rauch had a home run and a double for Niles against the Cavemen, while Bailey Bickel had a double and a triple. The Vikings also got a triple from Chloe Hargraves and a double from Amira Lee.

Against Dwenger, Bickel, Emerson Garrard, Lee and Syson all doubled. In the win over Western, Niles finished with eight hits.

The Vikings are back in action Tuesday with a BCS Athletic Conference doubleheader against rival Buchanan. The first game is set to begin at 4 p.m. at Vella Park.