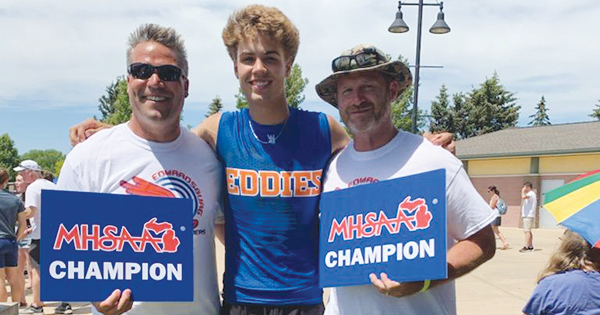 EDWARDSBURG — When presented with a challenge or obstacle during the 2021 track and field season, Luke Stowasser simply leaped over it.

The record-breaking Edwardsburg junior took home state titles in both high jump and long jump Saturday, June 5 at the MHSAA Division 2 track and field state finals in Zeeland, with leaps of 6-6 and 21-10 respectively.

“It feels great,” he said. “I wasn’t stressing about it too much. I did my thing and brought it home.”

Stowasser is no stranger to the limelight. As a freshman, he placed second in both the high jump and long jump at the state finals and was poised to make another run as a sophomore before the COVID-19 pandemic brought about the end of spring sports.

He was bound and determined to take home both titles this year.

“I knew I had the ability to get it done,” he said. “I just had to stay focused and keep my mind right.”

It is not every day that an Eddie brings home not one, but two state titles. According to Stowasser, he received a warm welcome from the Edwardsburg community upon his return.

“It was a pretty good response,” he said. “Everyone at school congratulated me, and they even put my name up on the marquee. It was the first time that’s happened to me, so that was pretty cool.”

Rather than rest on his laurels, Stowasser is preparing to test his mettle against the best jumpers in the country at the Nike-sponsored National Scholastic Athletics Foundation Outdoor Nationals, which take place from Wednesday, June 30 to Saturday, July 3 at the University of Oregon’s Hayward Field.

Stowasser was invited to compete after setting school records in both the high jump (6-10) and long jump (22-6.5) at the Division 2 regional meet in May. Stowasser’s record high jump was the highest jump in the state this year, and his long jump was third overall.

According to Athletic.net, Stowasser’s record high jump is tied with several athletes for 13th place, nationally.

“I have the opportunity to compete with some of the top guys in the nation,” he said. “It will be an awesome experience. If I can get up there and place high, that would be a great accomplishment.”

Stowasser has set some lofty goals for the future, but if his jump results are any indication, nothing is beyond his reach.

“After nationals, I plan on working and training throughout the summer,” he said. “My goal would be to get up in the mid-7’s in high jump. I want to go to a Division 1 college to compete and maybe qualify for the Olympic trials. That would be a huge goal for me.”