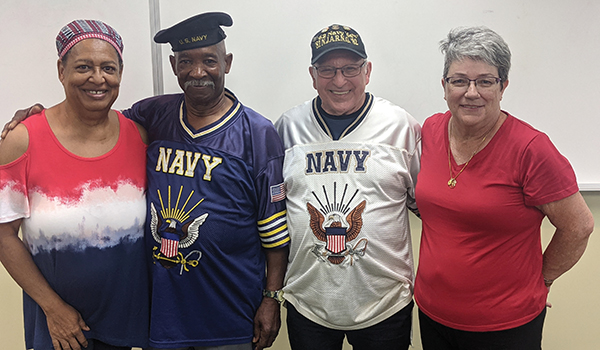 DOWAGIAC — Longtime Dowagiac resident Walter Swann had some extra pep in his step Thursday afternoon — and for good reason.

The Navy veteran was overjoyed to meet with his old Navy friend Francis Demaio in person this week for the first time in 58 years.

The moment was a joyous one for both Swann and Demaio, who reunited by phone last spring but were unable to meet in person until now due to the ongoing COVID-19 pandemic.

Demaio and his wife, Karen, arrived in Niles Wednesday from Florida. The couple plans to spend time with Swann and his wife, Alice, for a few days before traveling to New Jersey.

Decked out in Navy gear, the dynamic duo talked and laughed as if they had not been separated for more than five decades.

Swann and Demaio met as recruits in the U.S. Naval Training Center in Great Lakes, Illinois in August 1962. Swann, from North Carolina, and Demaio, from New York, became fast friends.

On the night of their boot camp graduation in October 1962, Swann went to Chicago on liberty, an authorized absence for short periods that gives sailors a break from their normal duties. While Swann was on liberty, U.S. president John F. Kennedy made an announcement that marked the beginning of the Cuban Missile Crisis.

Swann and Demaio had already decided that they wanted to keep in touch with each other after graduation. Before leaving for the Caribbean Sea, Demaio wrote down his name and his mother’s address, and asked a sailor to give it to Swann upon his return from liberty.

He moved to Long Beach, California, where he went to work at the naval shipyard there. In 1996, Swann retired from the shipyard and moved to Dowagiac with his wife, Alice, in order to help take care of her mother.

After being discharged from the Navy in 1966, Demaio held down several jobs before working for Amtrak from 1978 until his retirement in 2005. He also served one year in the U.S. Army National Guard in the early 1980’s.

Swann and Demaio spent more than five decades searching for each other, but to no avail. Luckily for them, their wives came to the rescue.

After hearing stories about Demaio’s adventures with Swann for years, Karen searched and found Swann’s Facebook page and messaged his account. A few years later, Alice, who was setting up Swann’s Facebook on his new iPad, noticed the unread message Karen had sent and informed Swann.

“When I went on my first date with [Demaio], he talked about his buddy in boot camp,” Karen said. “He’s always talking about Swann this, Swann that. I think what I’ve noticed is that they’re both very unique guys. They’re buddies. They had each other’s back in boot camp, and then they got separated in the blink of an eye. It really had an effect on Frank’s life. I was determined I was going to find him. If he was still out there, I was going to find him.”

“I contacted her and told her that yes, this is the Swann you’re looking for,” Alice said. “They FaceTimed each other as soon as they could.”

Demaio believes he and Swann share a special platonic relationship that the passing of time could not erase.

“I think we’re life partners,” he said. “It’s not always romantic love between a woman and a man. This is something where we connected 58 years ago, and for 58 years, we’ve had our minds on each other. Neither of us lost hope, and here we are. I’d take a bullet for this guy.”

After spending much-needed quality time with each other after more than 50 years apart, the duo is determined to meet in person on an annual basis going forward.

“God really set this up,” Swann said. “I don’t know what his plans are for us but we cannot allow ourselves to not see each other at least once or twice a year. I don’t care where we have to go to do it.”