Berrien County Board of Commissioners to resume in-person meetings… 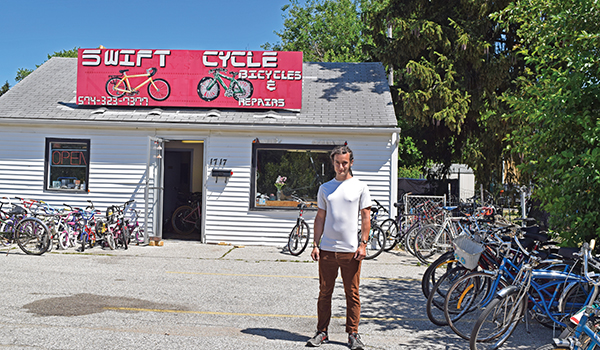 NILES – A Niles bicycle shop is making sure to commemorate June with its own Pride Ride.

Swift Cycle, 1717 Oak St., Niles, owner David Rees announced the shop would host a no-drop ride Thursday, June 24, where bike riders will meet at 5:45 p.m. in the parking lot at N. Second and Sycamore streets, behind Pizza Transit and next to The NODE. The ride will begin at 6:15 p.m. and will navigate from downtown Niles to the Indiana Michigan River Valley Trail.

“[We’re following] the rule of no-drop. We won’t leave anybody behind,” Rees said. “The plan is to go down the [Indiana Michigan River Valley Trail] toward South Bend. We’ve got no cars to worry about, and for the most part, it’s a really nice, pretty flat ride.”
Rees said the riders will go the distance participants are interested in going, whether it is two miles or 10.

“We can do that and come back,” Rees said.

The ride will return to The NODE, where he hopes people will hang out, grab some food from a downtown business and continue celebrating Pride Month.

“It’s really important to show your pride if you are a person who in any way identifies with the LGBTQ [lesbian, gay, bisexual, transgender, queer] community at large,” Rees said. “Bicycles have always been an interesting, unifying and empowering factor among people.”

The equalizing and democratizing nature of bicycles is something Rees believes makes the ride accessible to people of many different backgrounds.

Codi Ciesielski, who works at Swift Cycle, helped Rees with the concept.

Rees said he was hearing from many people planning to attend the ride.

“It would be really cool if that happens,” Rees said.

“With more than 370,000 members of the LGBTQ+ community calling Michigan home, LGBTQ+ individuals are our neighbors, relatives and friends,” Gilchrist said.

Rees wanted to ensure people who could not ride bicycles could celebrate as well, so the ride will be ending at The NODE where he hopes people will come together.

“It’s not like we are the only ones who have pride [in Niles]. I’m really excited to end the ride where it starts, right there in the middle of all of that stuff [at The NODE]. I know The Brass Eye, Pizza Transit, Smokin’ Jims, El Amigo Pepe, I know all the people who run those businesses and I want to support them as well,” Rees said.