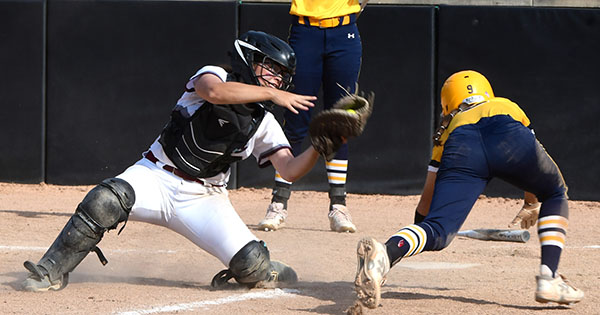 Buchanan catcher Christin Cooper gets set to tag out a Standish-Sterling runner at the plate during the Division 3 semifinal game Friday. (Leader photo/KELLY SWEENEY)

EAST LANSING — History could be made Saturday evening when the unranked Buchanan softball team takes on No. 2 Richmond for the Division 3 state championship at Michigan State University.

Buchanan’s success all season has come from the Bucks getting good pitching, playing great defense and timely hitting. Against Standish-Sterling, Buchanan had 15 hits and played solid defense behind senior pitcher Sophia Lozmack, who scattered 12 hits and gave up three earned runs. Lozmack struck out just three batters and walked three.

“That team hit the ball well — that’s why they’re here,” said Buchanan Coach Rachel Carlson. “We told Sophia we would hit for her and that’s what we did.”

As it has done throughout the tournament, the Bucks got on the board first and continued scoring to force the Panthers to chase then the entire contest.

A four-run third inning set the tone for the remainder of the contest. The Bucks led 5-0 before Standish-Sterling got on the board. Buchanan would score in four consecutive innings, culminating with a three-run fifth to lead 9-1.

“Our offense runs like this because no one has to be the star every night,” Carlson said. “Tonight, Sophia didn’t hit very well, but the other kids did. That’s happened for us all year. We tell them, ‘If you having a bad night, we’ll pick you up.’ Hailee [Kara] and Alea [Fisher] have been hitting like that all year.”

Kara and Fisher were both 3-for-4 against the Panthers’ Taylor Krzyzaniak, who gave up eight earned runs on 15 hits. All of Fisher’s and Kara»s hits were doubles.

Standish-Sterling, which scored a single run in the fourth inning, made one final run at the Bucks in the sixth when it scored three times.

The Panthers had five hits in the inning off a Lozmack, who improved to 23-2 in the circle for Buchanan. Lozmack struck out Krzyzaniak, who had a pair of doubles in the game, to end the threat.

In the seventh, the Panthers got a double from Karasyn Kraska with one out before a fly ball to right and a strikeout of pinch-hitter Paige Hilborn by Lozmack kicked off the celebration for the Bucks.

Carlson said she believes her team will be ready when it plays Saturday in the title game. It has had the same approach to each game this season: working hard and getting the job done.

“These kids work so hard, and they are purposeful with their work,” she said. “When they get on the bus, they’re going to believe they can do that tomorrow. I’m not sure I’m going to have to say anything to them at all.”

Buchanan and Richmond are scheduled to play at 5:30 p.m.